The Farming & Wildlife Advisory Group South West (FWAGSW) is a registered charity representing the region’s farmers and landowners in the delivery of wildlife conservation. They are part funded by Natural England and work with partner conservation organizations including the Wildlife Trust. In Gloucestershire they are heavily involved in Water with Integrated Local Delivery (WILD) projects restoring ditches, streams and rivers to aid the currently failing ecology and fish populations.

The work at Puckham today was extending an existing area of woodland, partly as replacement for a number of Ash trees which are diseased and will shortly have to be felled. A deal of conservation work has already been carried out in this location including formation of a chain of ponds in a valley with associated drainage channels and streams with hardcore beds to prevent erosion and to provide fording points. We are told that the plan is for a further 3,000 trees to be planted here and the first of them are already on site awaiting the gentle ministrations of volunteer groups.

One of the chain of ponds formed a part of the controlled drainage system, as well as a resource for wildlife.

The site at the start of the day – empty

The site at the end of the day – fully planted up.

Our first task was to move the trees, protective tubes and stability stakes from a stockpile in an adjant field to the planting location. The FWAGSW rep had already been on site and planted a set of bamboo markers to show the spacing of the trees , Further she had labelled each marker with the type of tree to be planted there. Then followed a period of people walking around the site shouting “I have a Prunus – find me a Prunus marker anyone” Eventually an appropriate tree was placed beside each of the markers, together with a protective plastic tube and a timber stake and the planting process could begin, 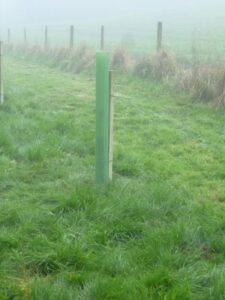 Such was the energy and enthusiasm of the volunteers that we cruised through the 100 trees, finishing well before lunchtime. After consulting with the landowner and the FWAGSW rep we extended our planting to adjacent areas, including some challenging locations on steep banks.

The mist was present all day, as can be seen in the photographs, and as time went by it became thicker and we were losing the light so we called an unusually early halt, having filled our quota, and all went home for a hot shower.