On Sunday 27 March 2022, volunteers from GVCV returned to the site on Nosehill Farm, Stow-on-the -Wold, to work again at the quarry face. This part of the farm contains a disused quarry with an exposed face which contains elements of geological interest including a rare rock formation known as “Cotswold Slate”. As the face is listed the farmer is obliged to keep it clear of scrub etc so that it can be viewed by any interested parties. That is where GVCV come in. 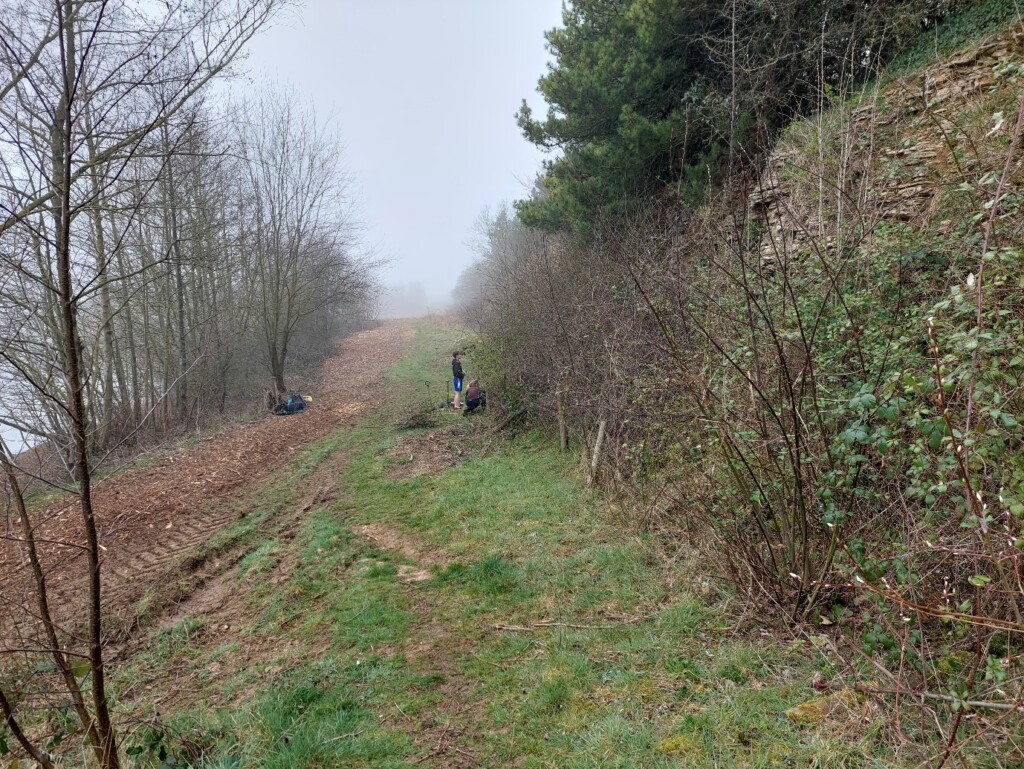 The rock face as we found it – the “before” photograph

There is a wire fence near the foot of the quarry face to keep visitors safe from falling rock and then a wide open space leading to the lake formed in the deep part of the quarry. We have spent many hours in the past clearing this wide space so we were delighted to see on this occasion that the farmer had employed a contractor to run through with a tracked vehicle, levelling the ground and grinding the undergrowth into a bed of woodchip.

That left us with the section between the wire fence and the quarry face, about ten foot wide, filled with bramble, brush and young trees (up to about 15 foot). We started a the end nearest the site entrance and cleared a good length, as far as the dinosaur footprint. (There is the imprint of a dinosaur’s footprint in a rock with an explanatory information board.}

The cut material is problematic on this site. On most sites we burn it but on listed sites that is not generally permitted. We therefore leave the brash in piles which the farmer clears using a tractor with a fork lift. 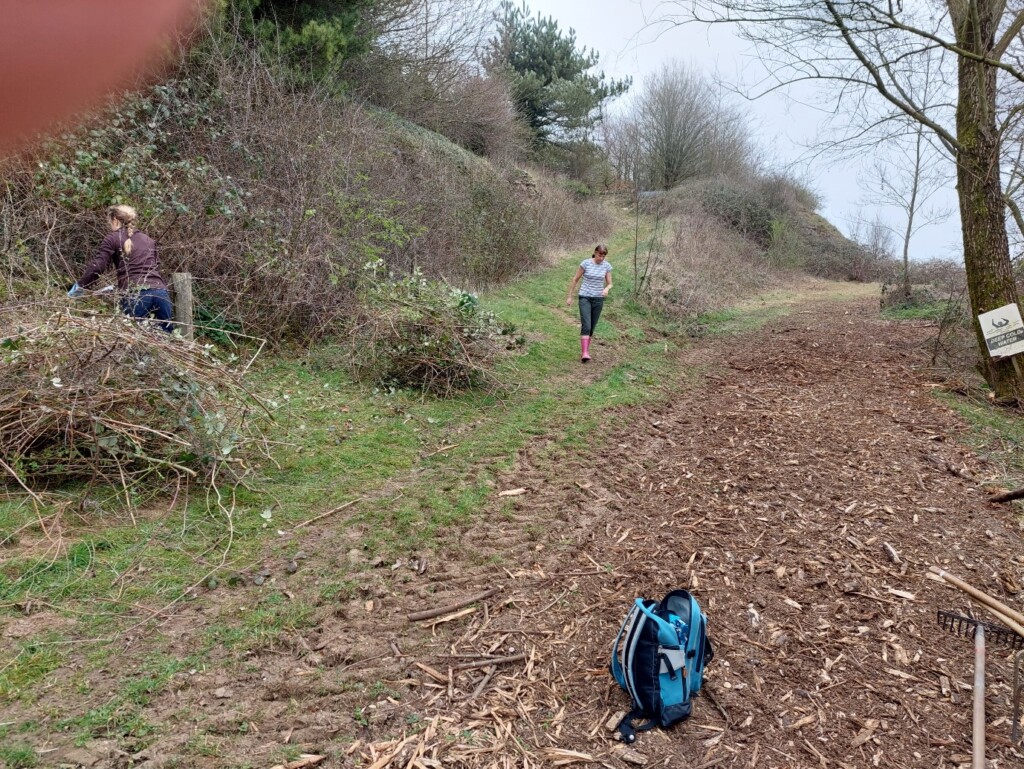 Multiple brash piles. We keep the smallish to allow continued access through the site. Note the mechanical stripping and levelling of the open area – previously done by us by hand. 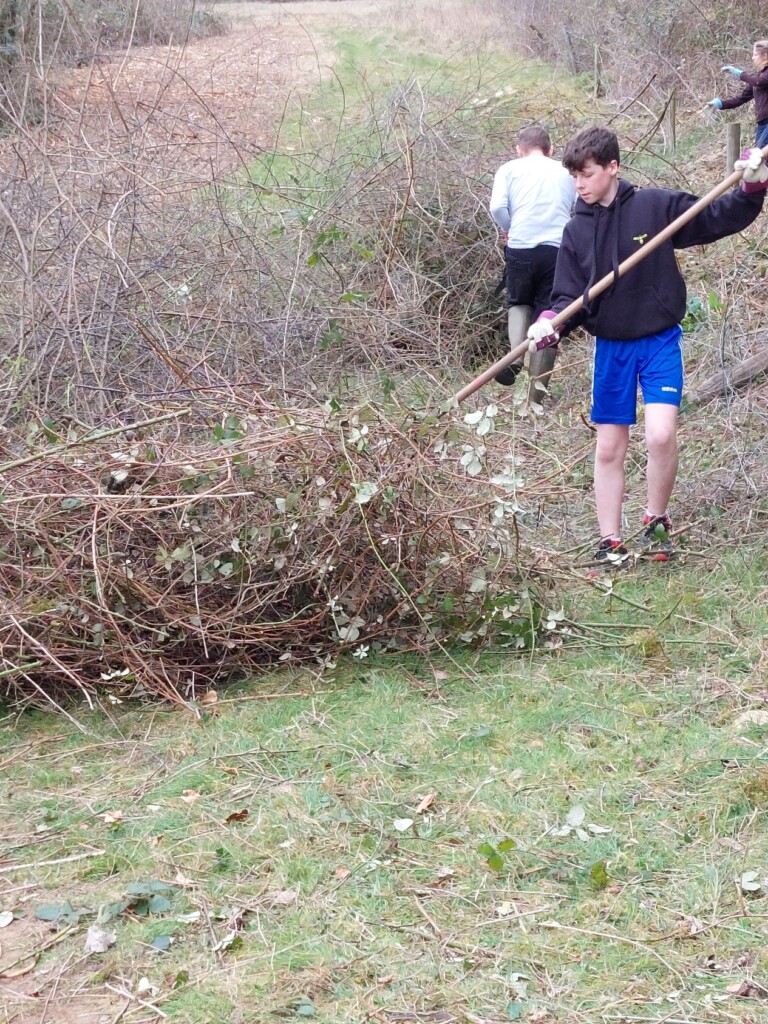 Raking the brash into piles – harder work than you might think !

On this task we were joined by a “next generation” volunteer, only 14 years old. He worked under close supervision and was ably assisted by the experienced volunteers around him. He certainly pulled his weight on the task, but I think the unaccustomed form of exercise will have left him somewhat tired and stiff the next morning. 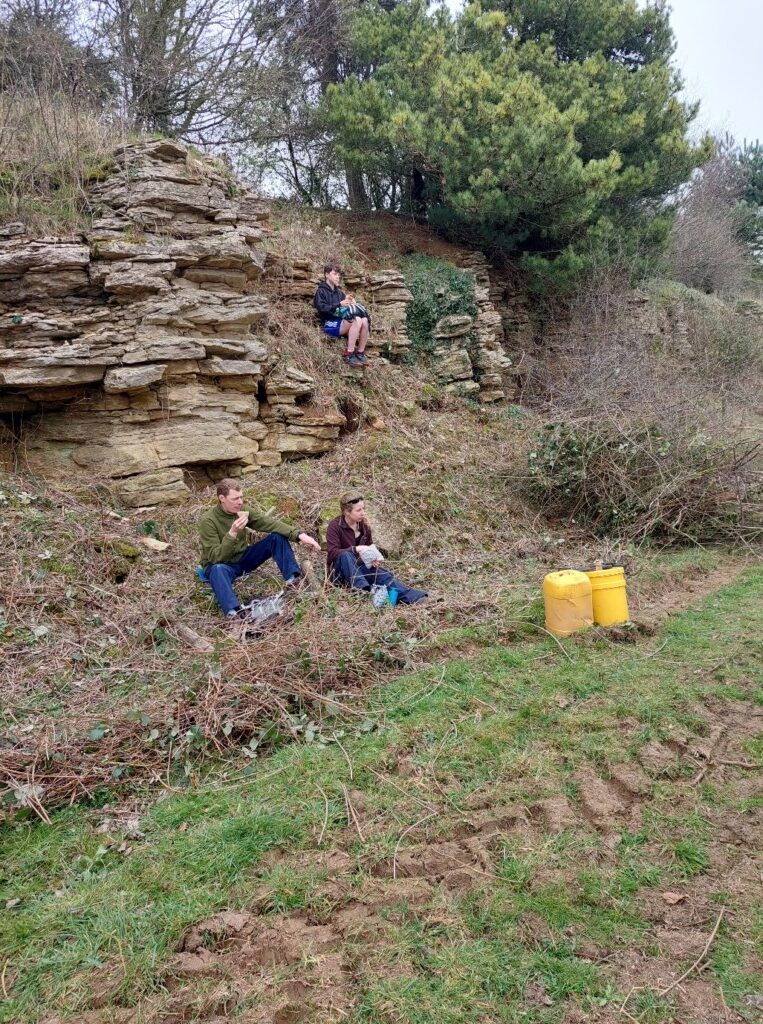 Lunch – time to look back on the mornings work. Note our young volunteer elected to take “high tea” 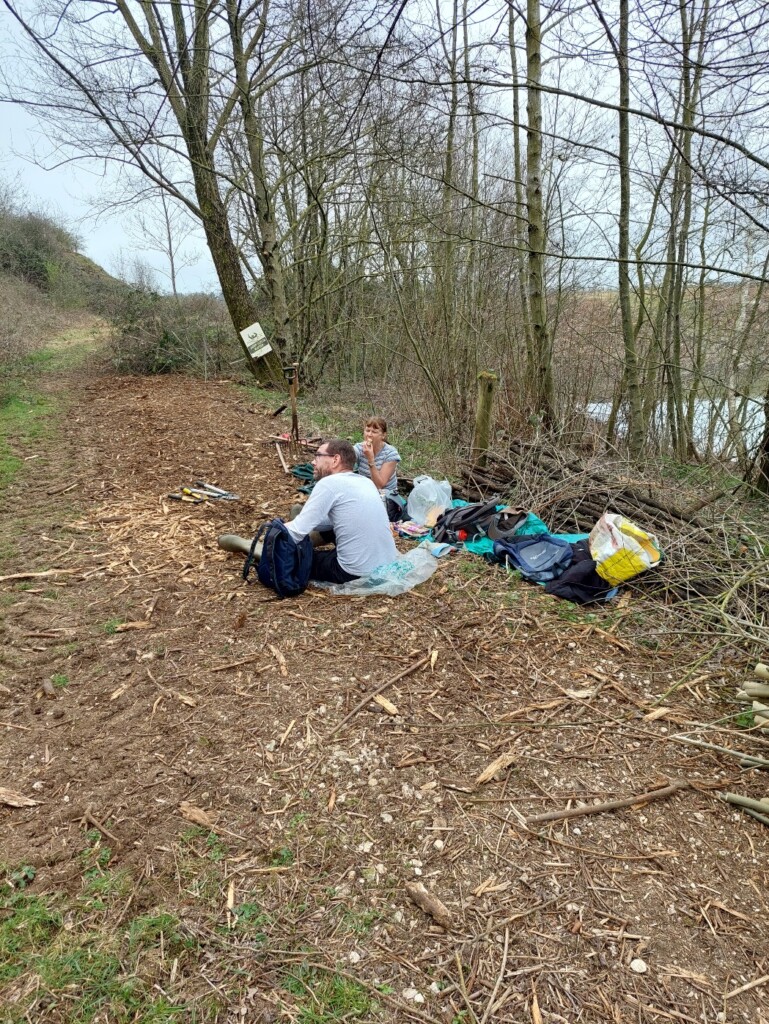 The lake, the trees and the scrub make the area attractive to birds and we certainly heard their song throughout the day. The song became a bit raucous when the Canada geese took exception to the farmer harrowing an adjacent field. There is a specific bank near the site entrance which is particularly attractive to butterflies, including the rare “Small Blue”. There are assorted mammals tunnelling near the lake and in fissures in the quarry face. The animal world clearly make this site a busy place, except on the one or two days in the year when there are hoards of volunteers tramping through it. 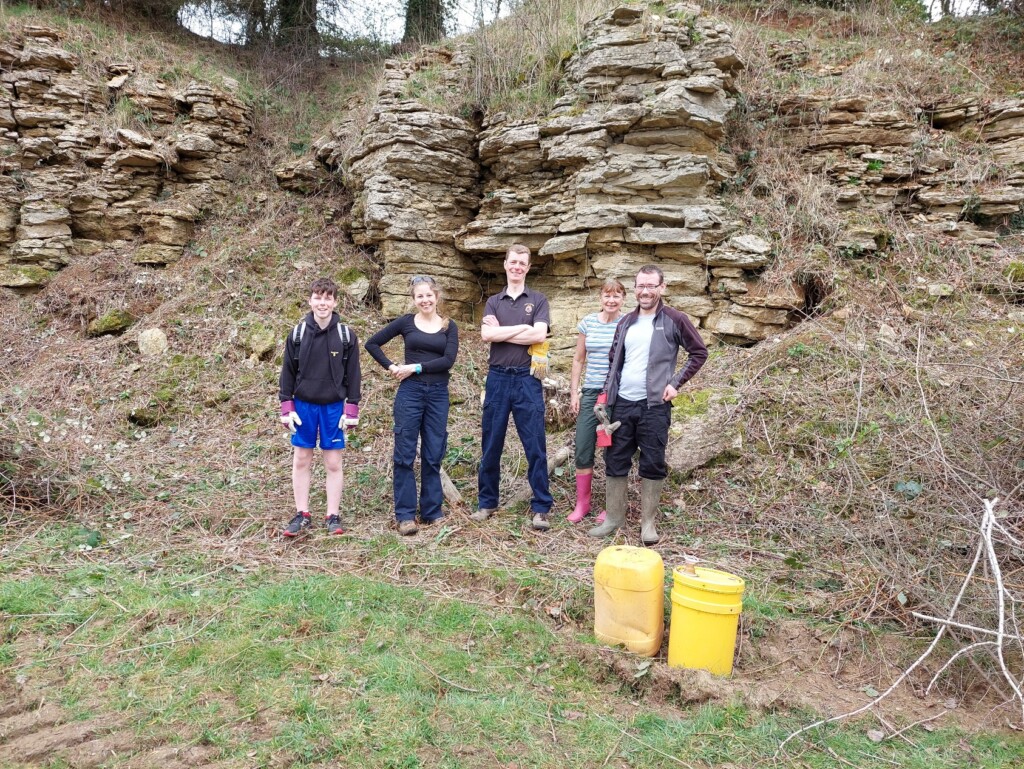 Some of the happy band of volunteers who worked on this task. Note the drums are nothing to do with us, oil used by the farmer on his machinery we believe. 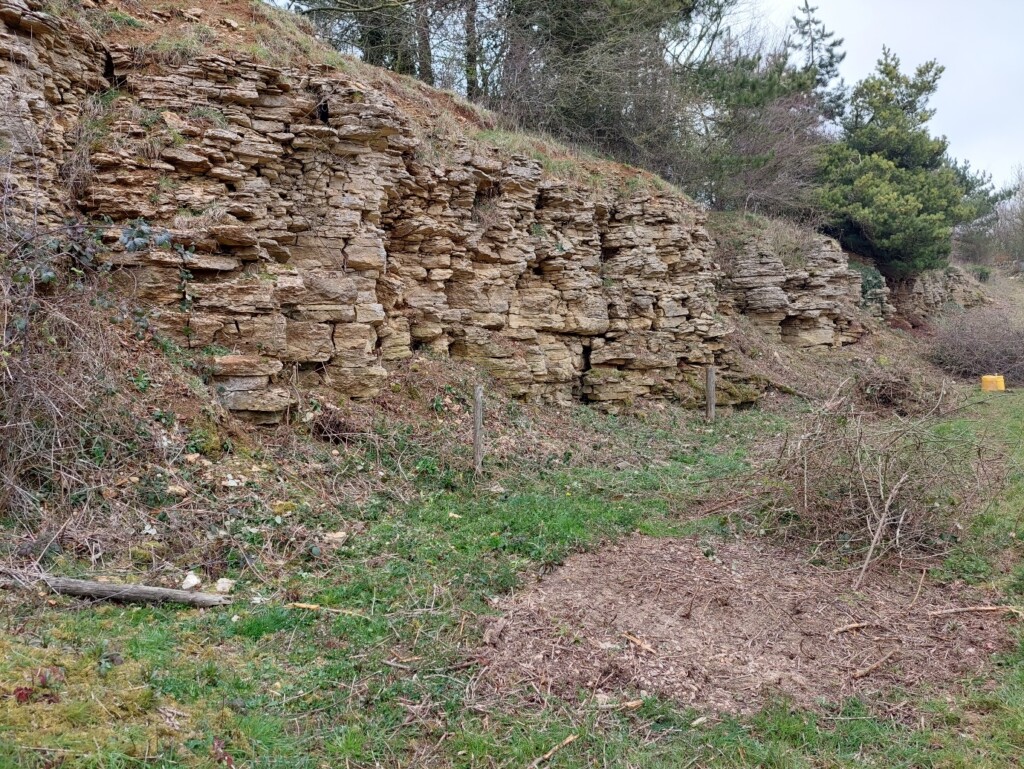 The rock face as we left it – the “after” picture