Coopers Hill LNR is an SSSI consists of 137 acres of Atlantic Beech woodland, with pockets of orchid rich limestone grassland (good for fungi and species including the Roman snail), now owned by GCC and managed by the Warden from Crickley Hill (currently Julian Bendle). It includes High Botheridge Camp Scheduled Ancient Monument, the remains of an Iron Age hill fort, possibly the largest in Gloucestershire. The Cotswold Way runs through the reserve and of course it is the site of the annual Cheese Rolling Race, said by some to date from Pre Roman times.

These woodlands were listed in the Doomsday book in 1086 being part of the holdings of the monks of Gloucester Abbey (who built nearby Prinknesh Abbey) When Henry VIII dissolved the monasteries he made Prinknesh a hunting lodge and made the surrounding woodland, including Coopers Hill, a Royal hunting Ground. Coopers Hill has been registered as Common Land since medieval times with the commoners having rights of Herbage, Pannage, Estovers and Turberry (grazing for cattle, sheep etc; allowing pigs to forage for acorns; cutting or gathering wood; digging turf or peat for roofing or fuel) 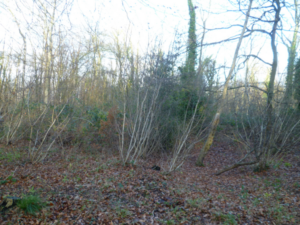 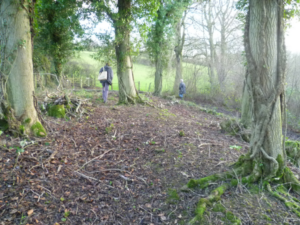 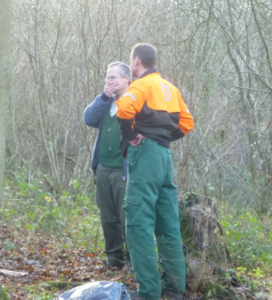 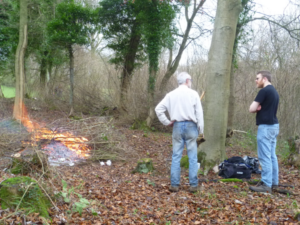 If we grasp it from both sides we can surely push it straight onto the fire, don’t you think?

An ancient form of woodland management is coppicing where trees, generally Hazel, are cut down to ground level, resulting in multiple stems emanating from the stump. This process benefits many forms bird and insect life. Every ten years or so these shoots are harvested for use in hedging and the production of hurdles and other items. GVCV coppiced one area last autumn and the task on Sunday 20 December was to continue the process on the next adjacent area.

As well as making use of this material on the site an amount is also provided to schools in the area who operate Forest Schools to educate their children in aspects of nature, woodcraft etc. We selected and stacked suitable material for this by the side of the track for later collection and delivery by the Warden.

Our activity produced quantities of brash, material with no real use, which we burned on a fire, carefully monitored by the warden as was necessary on a fine but fairly windy day. We made good secondary use of the fire by cooking potatoes in tinfoil, just the thing for a hot, filling lunch. 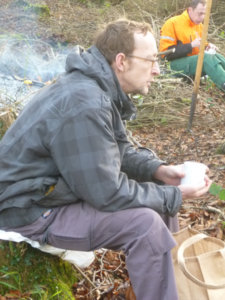 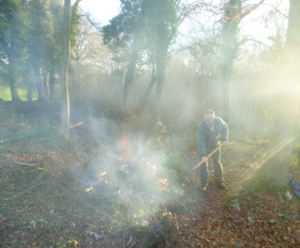 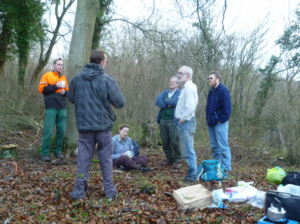 We managed to coppice a significant area as well as clearing a quantity of bramble and the like and as the light faded and we packed away our tools we were able to look round with some satisfaction at a large area of nothingness (where once there was dense woodland and scrub). But we know where we will be working again in 10 years time!