Bulls Cross is one part of a SSSI comprising Bulls Cross, Juniper Hill and the Frith, located within the Cotswold AONB.   The woodland makeup, is dominated by ash, includes yew and a shrub layer of hazel and hawthorn. The ground flora is dominated by bramble and dog’s mercury.  A secondary woodland to the north includes silver birch.   The site is a tiny (3 hectare) common consisting of 4 triangles of limestone grassland/secondary woodland intersected by 3 minor roads and bordered by a busy B road on its eastern edge

Bulls Cross is perhaps one of the best known commons in the whole of the Cotswolds thanks to Laurie Lee’s descriptions of it his much-loved book, Cider with Rosie.   Lee depicts Bulls Cross as a ‘no-man’s crossing… a ‘ragged wildness of wind-bent turves [where] travellers would meet in suspicion, or lie in wait to do violence on each other, to rob or rape or murder.’  [so no change there]   Lee states that a hangman’s gibbet once hung here.   To this day Bulls Cross is a very busy crossroads and this goes back many hundreds of years to the days when it formed an important intersection of the routes linking Painswick and the older parts of Stroud to one of the main saltways between Berkeley and Birdlip.

Until sometime around the middle of the last century it was a bare, open patch of grassland that would have been visible from much of the surrounding Painswick Valley. Laurie Lee himself describes it as ‘a curious tundra, a sort of island of nothing set high above the crowded valleys… a baldness among the woods’.  The grass used to be kept short by commoners cattle, then the 1960s the crash in rabbit populations removed the natural grazers that in many cases had continued the grazing in place of the commoners’ livestock 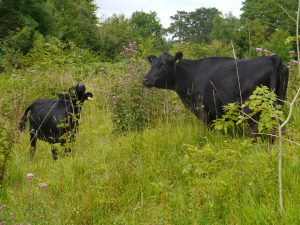 In 2013 cattle were returned to Bulls Cross after more than half a century of absence, the ban on permanent fencing on the common entailing the annual erection and removal of 800M of fencing to each of 3 paddocks. 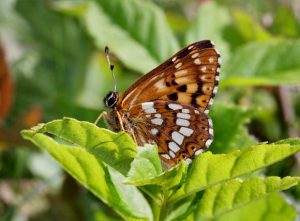 The Duke of Burgundy butterflies still breed here in good numbers in the spring, glow worms and slow worms can still be found across the site, kestrels hunt overhead and hundreds of orchids including lesser butterfly, pyramidal, common spotted, twayblade and white helleborine can be found thriving beneath the rampant bracken and willowherb. 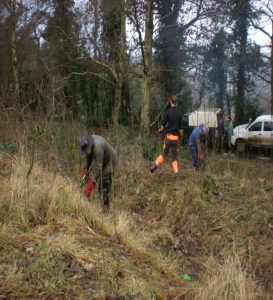 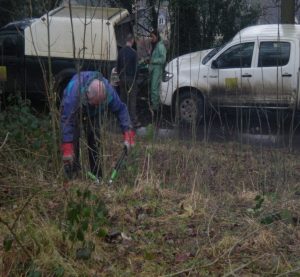 GVCV task on a cold and wet day was to cut out the ash sapling which had escaped the previous cull, allowing the warden to apply herbicide to the cut stems to kill the roots.   Of course Ash Die Back, evident over most of the site, will eventually negate the need for all this 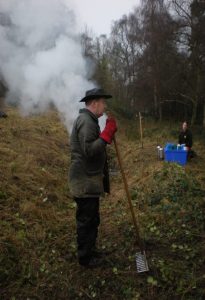 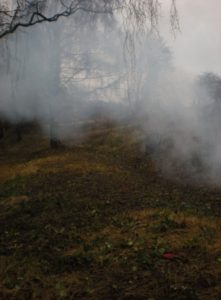 In the afternoon we were able to tackle the dense clumps of bramble to reduce their coverage of the site – a much more satisfying task, allowing us to look back and see our normal end-of-task vista of NOTHINGNESS.