Bull Cross, The Frith and Juniper Hill is a 42.33-hectare (104.6-acre) biological and geological Site of Special Scientific Interest in Gloucestershire. The site lies within the Cotswold Area of Outstanding Natural Beauty and is part registered as common land and part owned and managed as a nature reserve by the Gloucestershire Wildlife Trust.

The woodland makeup, which is dominated by ash, includes yew and a shrub layer of hazel and hawthorn. The ground flora is dominated by bramble and dog’s mercury. A secondary woodland to the north includes silver birch.

The grassland is semi-natural and the dominant species is upright brome. Also recorded are quaking grass, cock’s foot, cowslip and other limestone herbs. Significant numbers of orchids flourish on the site including musk orchid, but these are threatened by invasion of scrub such as hawthorn. Yew, whitebeam and juniper are scattered on the site.

The grassland supports a wide range of specialised plants and animals including many rare species including the Marsh Fritillary Butterfly and Adonis Blue Butterfly, Early gentian and Juniper to name but a few. Scrub habitats associated with limestone grasslands are also often of high value for wildlife.

Our task on 15 January 2017 was a continuation of our ongoing attack on the all pervading ash saplings. 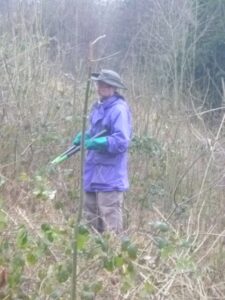 As well as using traditional loppers and brush saws we were able to play with the Wardens new tool, a sapling puller. This is a metre long steel handle with a claw at the bottom which clamps onto the base of the sapling. Pulling back on the pivot at the bottom produces a very strong pull which extracts the sapling plus a significant amount of its root. Very efficient, but the drawback is that the ground is left looking as though it has been ploughed. 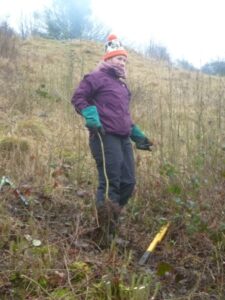 We worked under the direction of the Natural England warden and in conjunction with her team of local volunteers. With six of our people and four of theirs we formed a worthwhile task force and achieved a significant amount of clearance, the visible difference by the end of the day was certainly striking. On this occasion we removed only the Ash leaving the bramble and blackthorn in place. We had a fire and so were able to dispose completely of the brash we created. 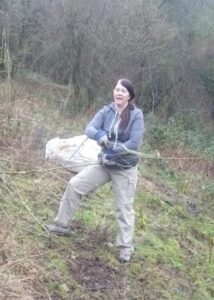 The weather was very kind to us, the torrential rain forecast for all day actually stopped just as we began work and did not start again until we were clear of the site. The atmosphere though was too damp to allow the use of herbicide on the cut stems to kill the roots so we cut some 9 inches above ground level so that the Warden can return on a dryer day, re-cut down to ground level and apply the chemical.