The Severnside Project focuses on land between the River Severn and the Sharpness Ship Canal, from Gloucester all the way to Arlingham. A Project Officer is appointed who works on issues of conservation, environmental management and community participation. The River Severn is a wonderful recreational and wildlife amenity, as is the Sharpness Ship Canal, for years the source of Gloucester’s wealth and status, but somewhat quieter now. The project seeks to Conserve enhance and manage important habitats in order to enhance biodiversity in the area, including the traditional landscape character of the flood plain from the river; to Increase opportunities for quiet informal countryside recreation including providing opportunities for local community participation and enabling some of the land to be profitably farmed and managed in an environmentally sensitive manner with wildlife in mind.

The Severnside Project received a top award in recognition of its work conserving the county’s most endangered mammal, the water vole. The project officer and volunteers continue to monitor the water vole population and to carry out management to allow it to spread out from its original release site.

At the North end of the Severnside Project, at Middle Rea near the village of Hempsted, on the South Western urban edge of Gloucester some 1.5 km from the A38, is a piece of land owned by Gloucester City Council but leased to Severn Trent Water Ltd. This land is generally identified as GCC site 461 STW. The parcel of land covers 12.5 Hectares and STW have built and operate a sewage treatment plant there which serves some 200,000 population in the area. The site is flanked by the River Severn and by the Sharpness canal which separates it from Gloucester city. The Severn frequently floods the site in winter, the flood plain extending some 2km all round the site.

In order to screen the treatment plant the planners have required the reinforcement of native and evergreen woodland planting around the site forming a significant planting buffer together with characteristic hedgerows and shelterbelts. An extensive pattern of waterways, drains, ditches, brooks, rhynes draining the floodplain landscape provide important wetland habitats. The annual winter flooding provides fertile, lush meadow and pastures for summer grazing. Areas of wetland meadows designated as SSSIs and Key Wildlife Sites and Local Nature Reserves are managed to maintain high biodiversity interest.

STWL undertakes potentially dangerous and life threatening operations on a daily basis so to avoid any risk to the community as a result of its activities it excludes the general public from operational site areas. there are no footpaths across the site, only around the perimeter.

So with a diversity of woodland, large and small areas of water, wetlands, lush meadow and virtually no human presence the wildlife think they are in paradise.

GVCV have previously worked on this site coppicing to control the woodland and forming elevated walkways through wet areas. Our task on Sunday 6 May 20108 was to input into the water vole survey being carried out on the whole project. Some pertinent information was issued with the task notification :-

“You have all read or seen “The Wind in the Willows” by Kenneth Grahame and seen the character “Ratty”.   No one can understand why Kenneth called the character “Ratty” because he is clearly not a rat, but rather a water vole.   In the book he exhibits all the traits of a vole, he is competent, he is clean and tidy, he looks after Mole, he fights bravely against the Weasels and he is an all round good guy.   Rats do not behave like that, rats really are rats.   Even the illustrations confirm this misnomer; a rat is skinny with a pointed face and a long hairless pink tail and they love polluted water and eating carrion.   The pictures show a plump cuddly creature with a round face and big ears and a short fur covered tail, living in clean water and eating vegetation, all correct attributes of a vole. 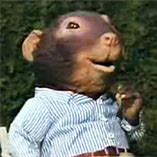 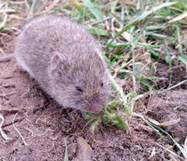 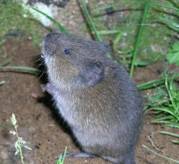 The Wildlife Trust say that voles have declined by 30% between 2006 and 2015 and they are now trying to remedy the situation by including them in the “Back from the Brink” list and by migrating specimens from areas where they are still strong.   So you are invited to come along on 6 May to Severnside (Gloucester) to help the rescue effort – come and cuddle a vole.   I am sure I read somewhere that vole cuddling cures dandruff and increases libido – come along and try out that theory”.

On site the warden gave an orientation talk on water voles from a more informed basis including a novel use for Pringle tubes. Then we started out along a drainage ditch where voles had been previously spotted looking for burrows formed in the bank, access tunnels formed through the base of the vegetation, food piles where voles had stashed pre-cut lengths of vegetation, footprints and poo in the neat, ordered toilets formed by the voles.

It was a blazing hot day and we were working in waist high vegetation on a drainage ditch which was virtually dry. 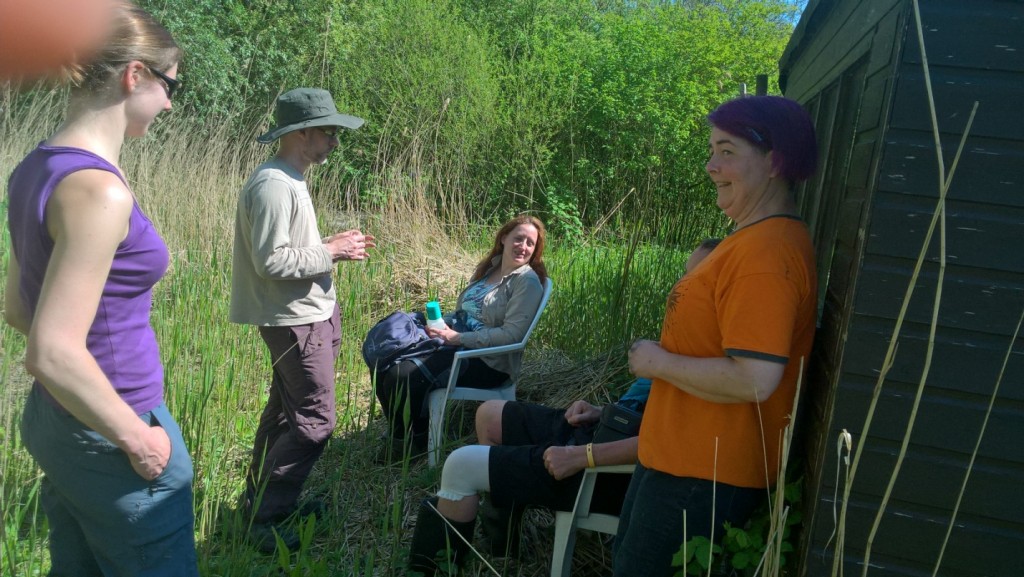 Desperately seeking a bit of shade at lunch break

Not altogether unexpectedly we failed to turn up a single sign of our furry friends. Our disappointment was only tempered by the knowledge that a nil result is still a valid result in the context of the overall Severnside survey.

We were compensated by hearing and seeing large numbers of birds and waterfowl and especially huge numbers of a great variety of butterflies. 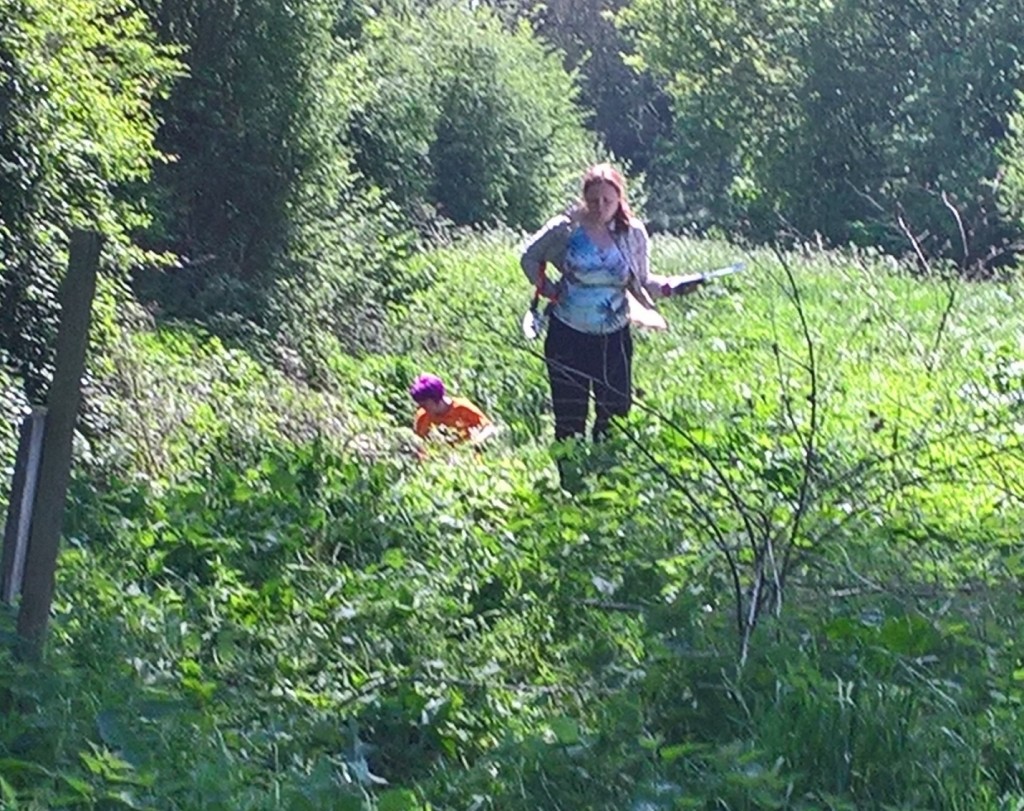 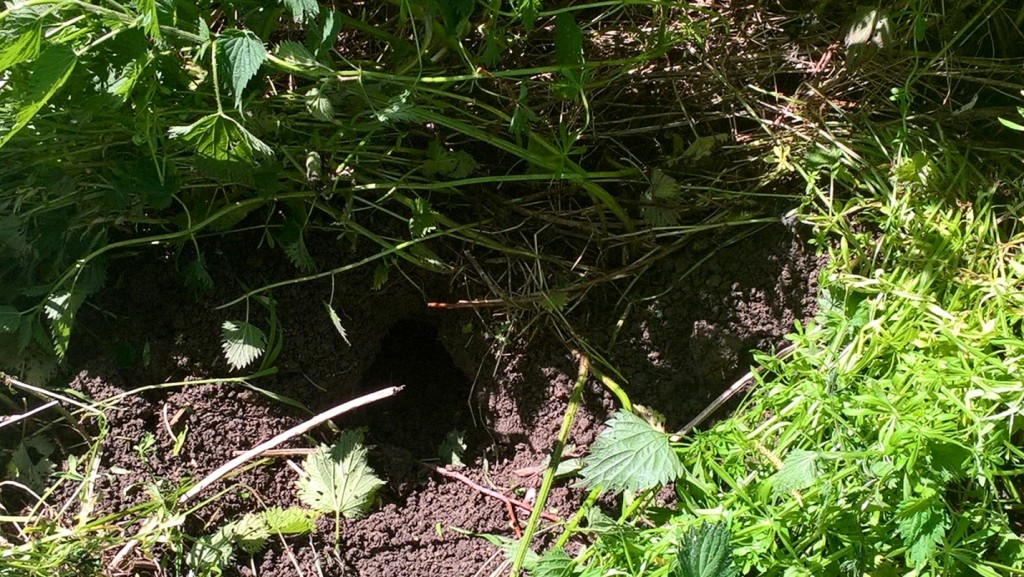 Aha a burrow, but a vole that size would terrify me