There is a national campaign underway to encourage planting of trees and hedges to improve the environment and to encourage wildlife and Gloucestershire farmers have bought into this campaign.

GVCV were engaged to plant some of these trees on the Overbury Estate on 19/12/2021 but we were then told that they had already planted all of the stock which was given to them and did not expect to receive a further supply until January. The task was therefore amended to cleaning the grass, weeds etc from around a double row of whips planted last year as the beginning of a hedge, in order to remove the competition they constituted to the whips for light, air and moisture.

Our assembly point before moving on to the work site was the massive grain store belonging to the farm. Naturally the grain attracts rodents but these are largely controlled by the farm cats. These started as one stray, joined later by another stray and both cats being female they produced litters so now the cats are a significant force on the farm and the rodent population is rapidly decreasing.

Two of the farm hands guided us to the site and explained the work to us. These were the farm workers, two brothers, who had performed the same function for us on previous tasks so we were all acquainted. Essential to their team was of course Gordon’s dog.

Before and after shots

The process between “Before” and “After”

The process between “Before” and “After”

There had been some damage by weather or wildlife since the original planting and so we were provided with a supply of spare whips, tree guards and supporting canes which we used to repair / replace as necessary.

Am I working hard!! Have you ever seen a blister that size ?

The weather was mild enough throughout the day but the temperature inversion and the lack of any degree of wind meant we were working in a mist the whole day, which varied between thick and even thicker. It did not affect the close range work we were doing but it wrapped around us and was slightly depressing. It made it totally impossible to see the location of the second work area at the opposite diagonal of the field.

We moved across to the second work site after lunch which included a roller coaster drive across the medieval Ridge and Furrow formations, still very much in evidence after 400 years.

We had a smaller work force post lunch but we managed to clear about 30 metres run, removing weed which was denser than that on the morning section. 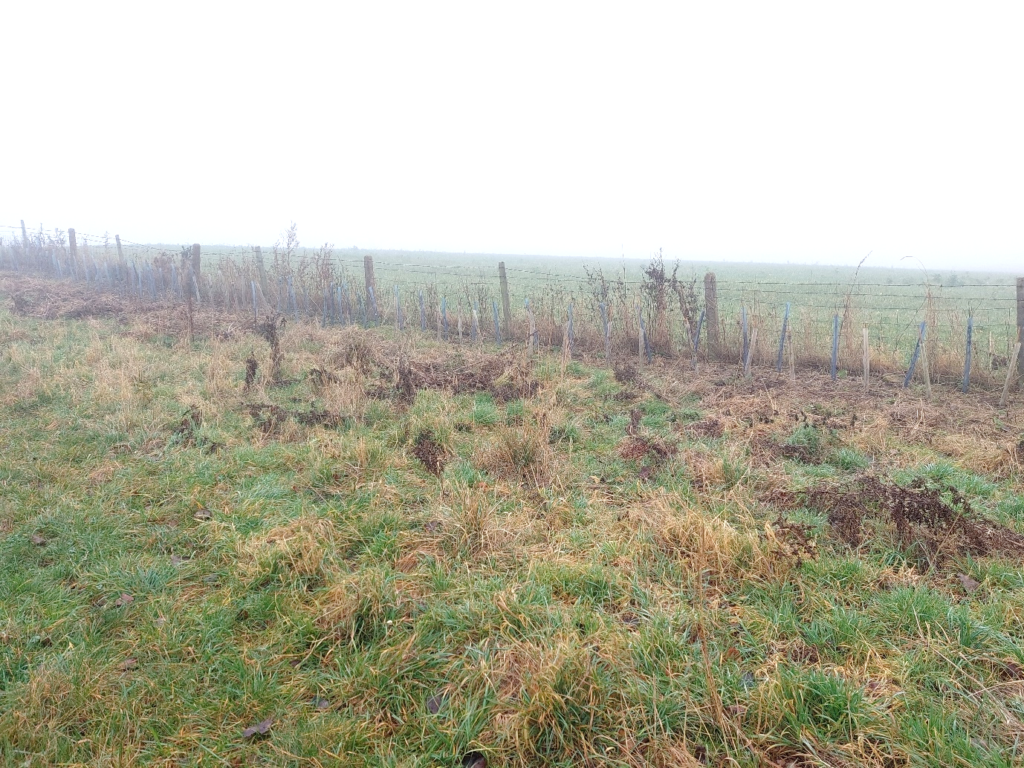 We cut the working day a bit short; the light was going, the mist was getting thicker and our energy levels were dropping but we left a large part of the hedging in far better condition than we found it.