After a drizzly start 6 members of the group set to the task of laying part of a hedge at Ruskin Mill Farm Nailsworth. The majority of the hedge is hazel and had been previously laid ten or more years ago (hedgelaying is a traditional management mostly aimed at providing stock-proof barriers but nowadays it has greater amenity and wildlife value). Two of the volunteers had no or little experience of this work but were shown the methods by the rest of us and particularly Peter the farm manager. 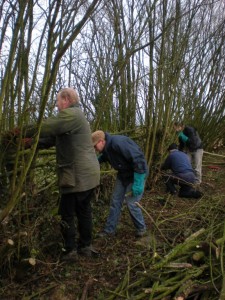 The initial work involved clearing some of the old/dead material that wasn’t of use for laying – this took quite a bit of time. Then we partly cut through near the base of stems using axes, billhooks or saws creating a hinge with which to lower the stem (known as a pleacher) – the cambium layer just below the bark is where nutrients, water etc are transported up and down the tree.

After a break for lunch, posh biscuits and cake we continued the task and managed to lay stems from two more, what essentially were, coppice stools. Amy, Phil and Andrew also helped stake along the hedge and bound part of this with ‘heatherings’ – thinner stems cleaned of side branches and woven around the stakes to hold the pleachers in place (plus it looks good). 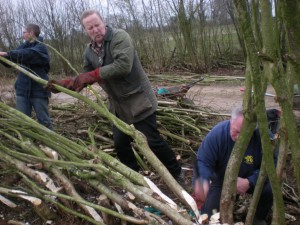 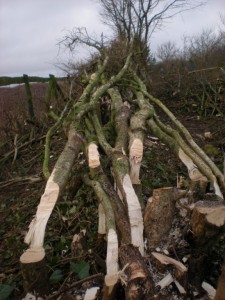 All in all I think we can be pleased with our efforts, hopefully next season we will be back for some more.