Haresfield Beacon and Standish Wood is a National Trust site of some 270 acres near Stroud. The Beacon rises to 700 feet and has extensive views over the Severn estuary and beyond and is designated as a SSSI because of its extensive range of wildlife. The Cotswold Way runs through the area and the archaeology includes an Iron Age ditch and with rampart, a long barrow and the remains of a Romano British hill fort. The woods include some ancient Beech trees (more than 400 years old) GVCV have in the recent past carried out some clearance along the line of the ditch and rampart to expose their construction.

The task on 7 February was to clear an area adjacent to the ditch, cutting out blackthorn and bramble and thinning out the ash trees so as to improve the grass for the benefit of the conservation cattle (belted Galloways) from the nearby Ebworth centre which graze the Beacon. 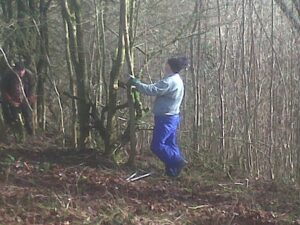 Sizing up the job before launching into felling mode

The National Trust Warden gave us some background of the site and explained the task for the day. He provided most of the tools needed for the work and gave the appropriate “tool talk” which saved us needing to do it. He also underlined the major hazard on the site which is the residue left behind by the army of thoughtless dog walkers every day. 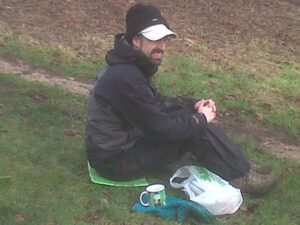 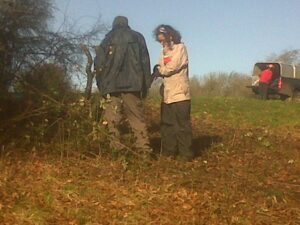 But to balance the loss of one member of the group, two welcome additions out on their first task with us 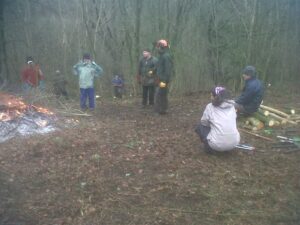 Best place to be on a cold day – tending the fire

The weather on the day was very mixed with periods of bright sunshine alternating with sharp squalls and windy most of the time. Overall it was fairly chilly which made the fire on which we burned the brash a popular place to be. 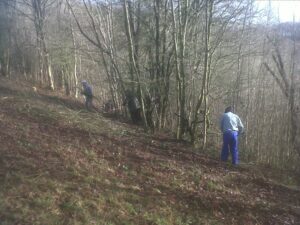 As is usual with these tasks the measure of our success was the blank expanse of grass we left behind us and the limitation on our success was the next defined section of scrub which we could see, waiting to be tackled on another day. Ah well, a conservation volunteers task is never done ! 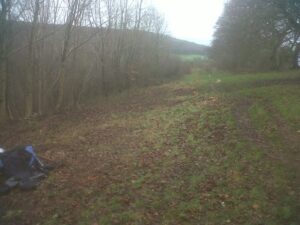 A vista of nothingness – the sign of our success.