Buckholt Wood lies to the north of Cranham Village and covers an area of 100 hectares (247 acres). It forms part of the Cotswolds Commons and Beechwoods NNR extending across 7.5 km of the Gloucestershire Cotswolds situated between Gloucester, Cheltenham and Stroud. Management of the reserve is carried out jointly by the owner and Natural England with the dual aims of conserving the diverse, uneven-aged beechwood with its rich wildlife and of producing timber. 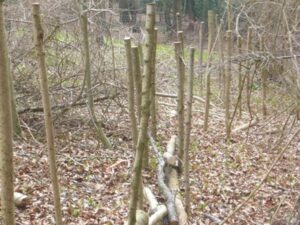 The blank canvas awaiting our attention

This ancient woodland is believed to have existed since the original wildwood developed after the retreat of the ice sheets. The name derives from the Saxon for beechwood. The woodlands were used to supply timber and firewood from as early as the 12th century and parts of the wood were managed by coppicing, which continues to present day. 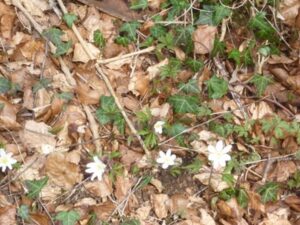 Forest anemones in profusion amongst the beech leaves

The beechwoods are amongst the most varied and species rich of their type. Dominated by beech, there are also ash, oak, whitebeam, wych elm and alder trees. Woodland shrubs are well represented, particularly holly and yew. Buckholt Wood is an outstanding site for wild fungi with over 780 species recorded. The ground flora in beech woods is typically sparse, however here it is richer including dogviolet, wood anemone, primrose, lords and ladies, and woodruff. On the drier slopes beneath the beech canopy, wild strawberry thrives and less common plants such as stinking hellebore, bird’s nest orchid and narrow-lipped helleborine may be found. 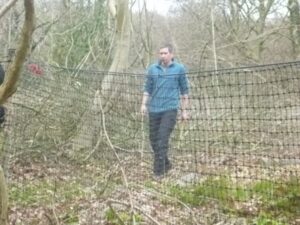 Our task on 03.04.16 was a continuation of that which we began last December, the construction of a “Dead Hedge” to prevent the mountjack deer from attacking the new shoots growing from recently coppiced stumps. Dead Hedging involves packing the coppiced material between pairs of uprights to form an impenetrable barrier. The good news is that we completed the enclosure to one area – the bad? news is that we began another area, so a return visit to Buckholt is assured. 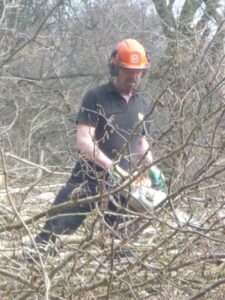 A man on a mission – the warden with his chain saw

We had a good day: we achieved more than was expected of us so the Warden was happy, the weather was kind to us and we got away from the site 15 minutes before the heavens opened up. 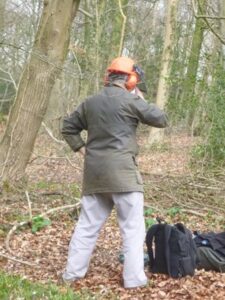 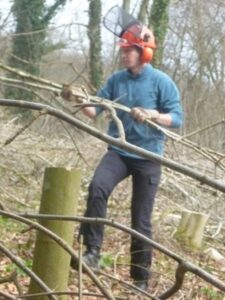 The latest in personal entertainment – headset with integral satellite aerial 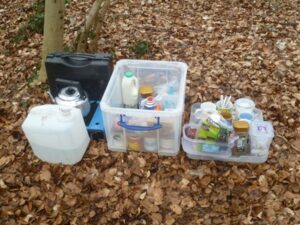 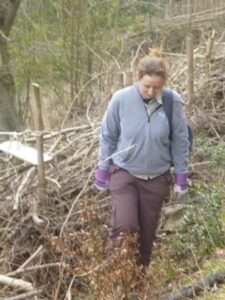 I  wonder – should I have tied that off with a bowline or a clove hitch ?