Bulls Cross is one part of a SSSI comprising Bulls Cross, Juniper Hill and the Frith, located within the very large Cotswold Commons and Beechwoods NNR.   The woodland makeup, is dominated by ash, includes yew and a shrub layer of hazel and hawthorn. See GVCV task report of 29/01/2017 for a fuller description of the site.

Our task on 14 January 2018 was to continue the scrub etc clearance in order to encourage the reversion of the area to limestone grassland. The grassed areas on the site are serving their original purpose since cattle were re-introduced onto the land (summer grazing only) in 2013. The plan being followed by Natural England, the managers of the site, is to complete work on the partly cleared strip of land adjacent to the A4070 before venturing into the Ash woodland on the North West side of the site.

The problem with Ash as ever is their profligacy, each tree dropping thousands of seeds, a large percentage of which take root. These seedlings need to be removed by a determined attack to prevent them reaching a size where they in turn drop seeds and exacerbate the problem. This is generally done by cutting off at ground level and treating the stumps with herbicide to kill the root below. An innovation is the use of “tree poppers” which enable small seedlings to be ripped from the soil, roots and all. Of course a small amount of exertion is needed to use these tools – who ever said conservation was easy !. 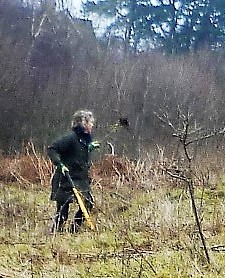 The tree popper in use

Movement around this part of the site is problematic because the ground levels vary greatly. The site is transverse by an ancient drove road (hence the name Bulls Cross) which over time has become a cutting with raised banks both sides. There are small borrow pits where stone has been extracted for domestic use and also raised areas where spoil has been tipped including quantities of ash. There are now also quantities of dung, kindly left for us by the cattle grazing earlier in the year, so changing footwear before getting back in the car is a definite necessity.

Taking out isolated seedlings produces no dramatic change to the view so it is only by watching the great heaps of brash going on to the bonfire that the results of our labours can be appreciated. 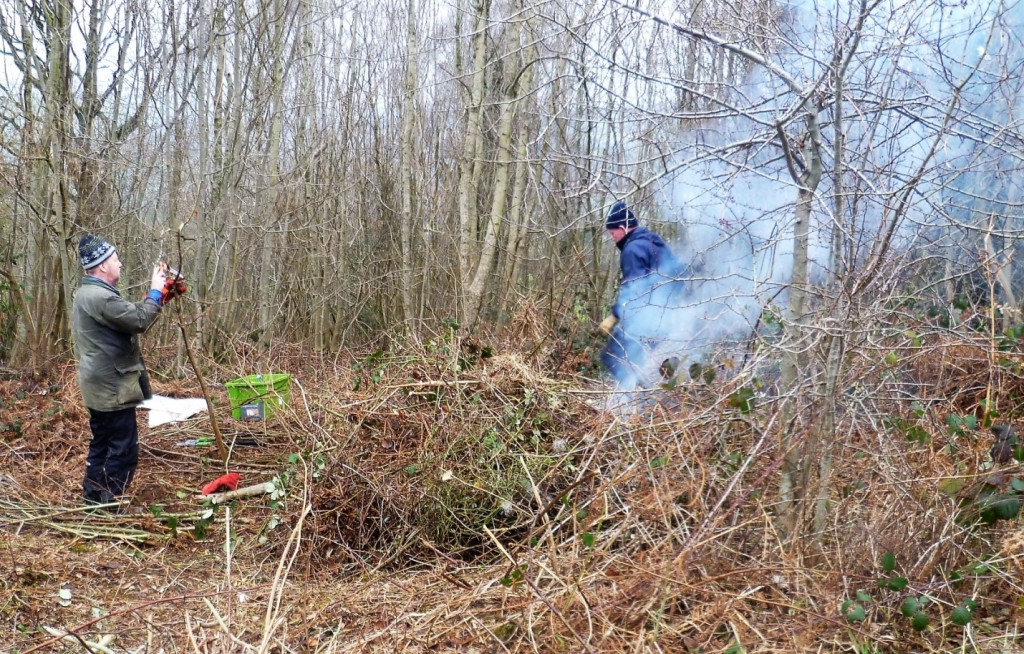 The results of a whole day’s effort, gone in a puff of smoke

Much of the work undertaken on this site is to improve it as an environment for the rare Duke of Burgundy fritillary which has been seen on adjacent sites. Natural England’s ambition is to create a favourable environment along a continuous string of locations so as to create a “butterfly highway” to facilitate migration and propagation. 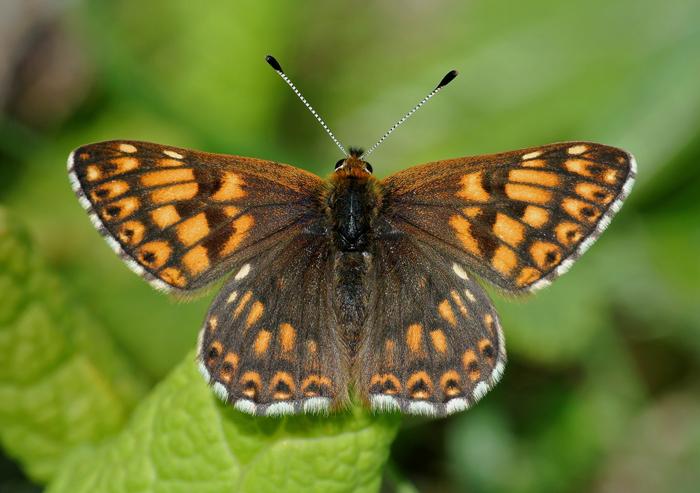 I do like to see a volunteer happy in their work