Sheepcombe Common is one section of the extensive Cotswold Commons and Beechwood NNR and notwithstanding that GVCV has worked on several of the other sections; this was our first visit to this specific area. The environment and the task was similar to that carried out on the other sections, to reduce the scrub element so as to allow facilitate the reversion to limestone grassland for the benefit of the various fauna and flora, a small herd of Belted Galloway’s doing their bit in the grand plan by grazing and fertilising the grass. The common is under the control of Natural England and we worked under the direction of the NE warden in charge of the site.

The site was overgrown with saplings produced from the seeds which the Ash trees drop is so prolifically resulting in thousands of individual stems to be tackled plus dense growths from stools which had been coppiced in the past. 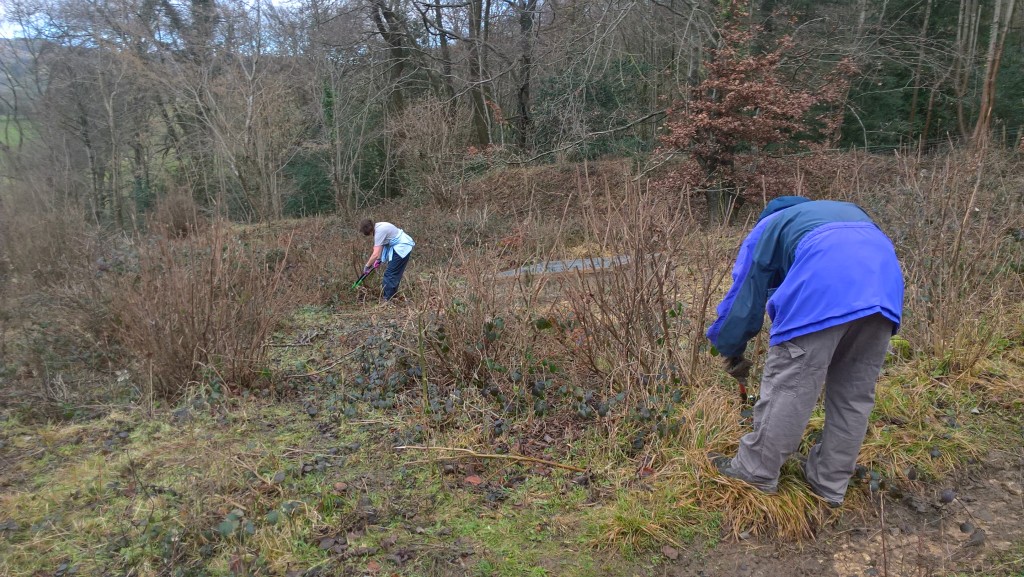 The site before our onslaught

Simply cutting down the stems allows them to re-appear next season so the cut stems need to be treated with chemicals which will kill the root below the ground. Sensible precautions before using this chemical (always under qualified supervision) involves use of protective gloves and suiting all of which transform any wearer to look like something from outer space. 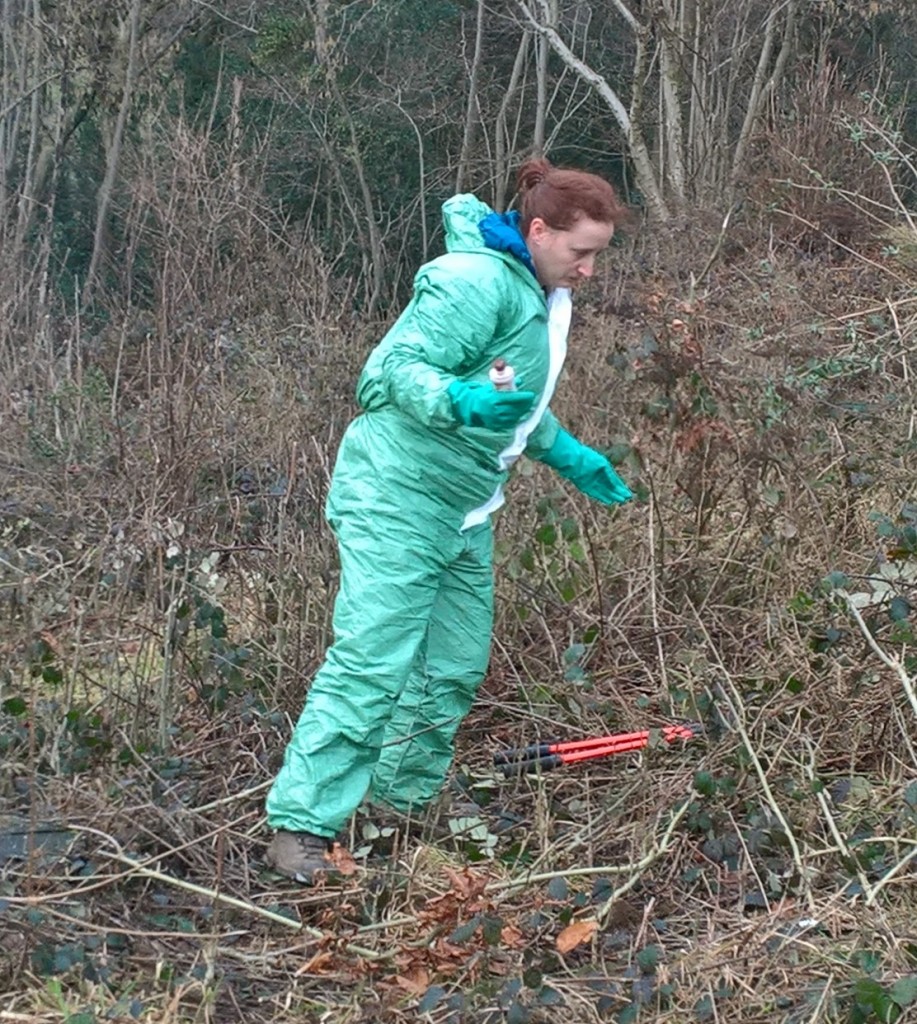 The task is made more difficult by having to hack through masses of bramble in order to reach the ash stems which are the primary objective. 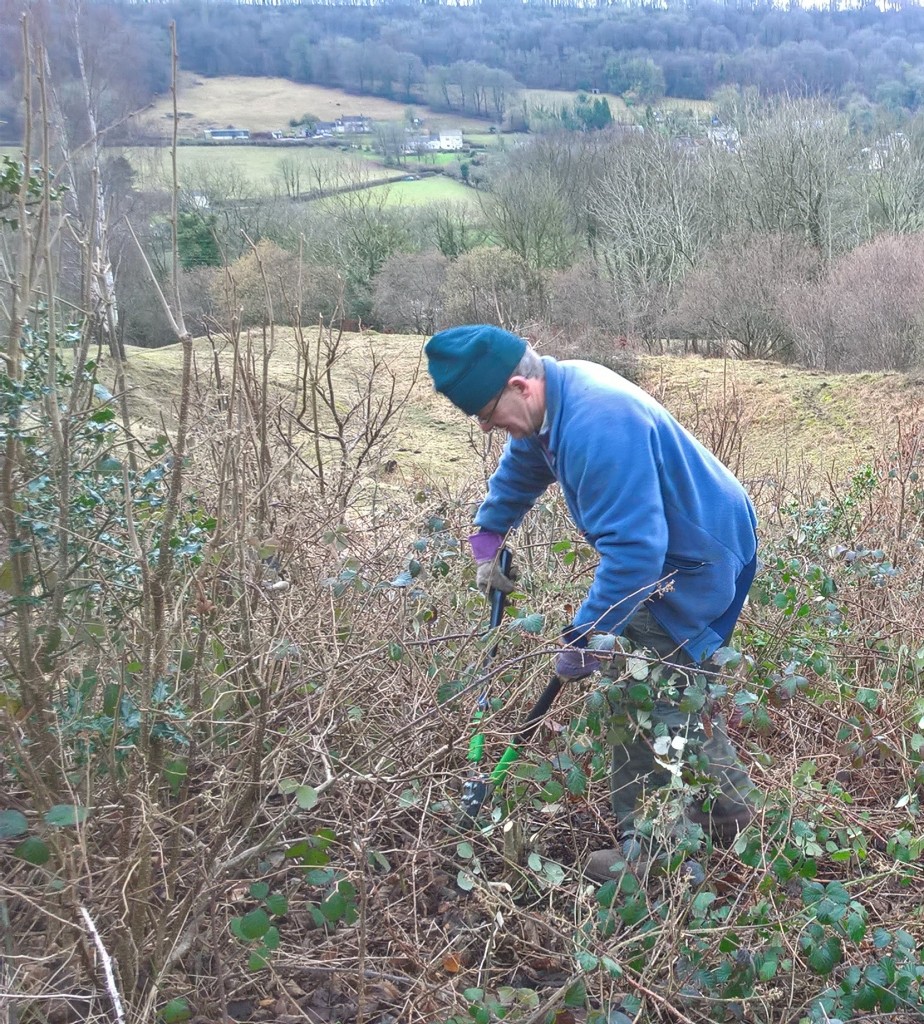 Diving into a bramble patch in hot pursuit of the ash

We continued our love-hate relationship with the “tree poppers” we were introduced to recently. They are efficient in that they remove the below ground root as well as the above ground shoot they are just a trifle awkward to use and failure to achieve a secure grip on first addressing the sapling can result in stripping off the bark or in snapping the root short. A great deal of effort and blue language to deal with only a single sapling. The efficient solution is that demonstrated by the warden – using a chain saw to slice off a complete area of saplings at ground level, ready for immediate chemical treatment.

A tortoise and hare situation – my money is on the hare this time.

The essential element in all of this clearance work is an efficient fire on which we can burn all of the brash produced by our efforts. Step one is lighting the fire, no easy task if it has rained continually for the previous twenty four hours. Step two is managing the fire so that it dies neither from dearth of material to burn nor from suffocation by an excess of material. Step three is the safe closing down of the fire, ceasing loading ahead of the shut down time, turning in to reduce the footprint and monitoring as long as is necessary depending on wind and combustible materials adjacent. Good practice is to have a designated individual who takes responsibility for the fire. 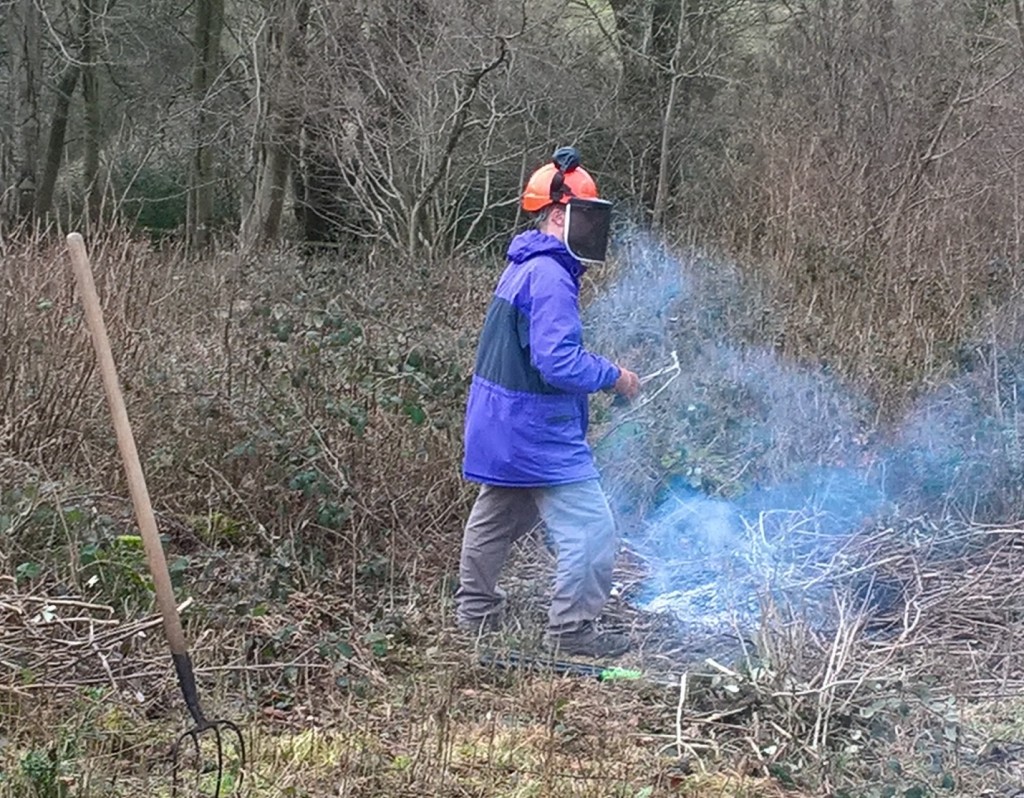 The wire mesh on the helmet is a safety feature – or is this volunteer just shy ? 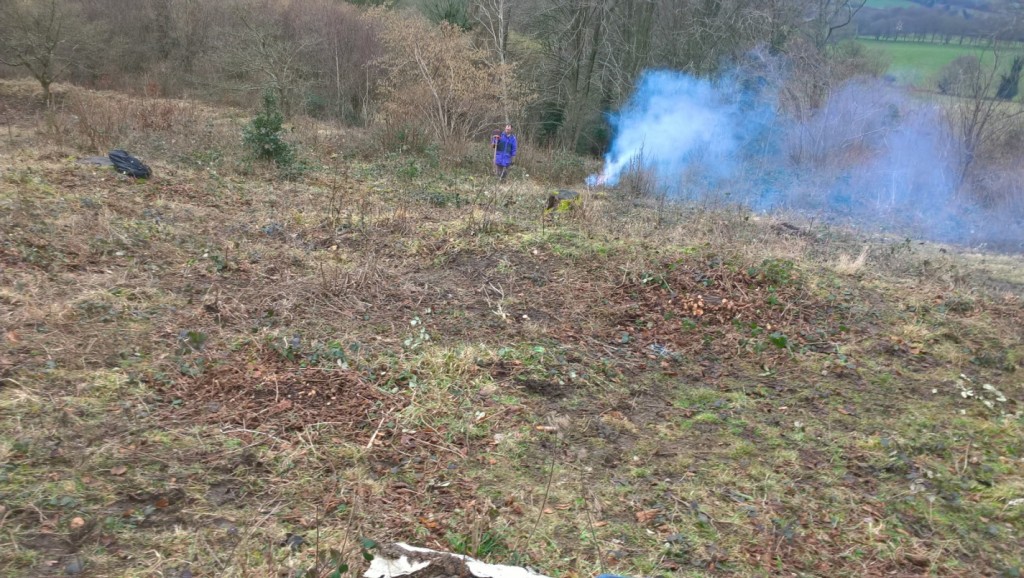 The cleared site at the end of our efforts