Like most farms now the Overbury Partnership is a mix of arable, sheep, forestry, leasing long term and holiday property, leasing conference and office space, a stud and in this case a children’s pre-school group – diversity being the key to survival.

The land is rich at around 100 feet in the Evesham valley, reducing to poor at 1,000 feet on Bredon Hill and so a range of crops and techniques are required across the farm.

There are three techniques showcased on the farm. The first is rotation such that the land is never left fallow. A mix species cover crop of radishes, clover, mustard etc is grown over the winter, which reduces soil erosion and which is grazed by the sheep, then a summer crop of grain or barley is sown through it, the residue of the cover crop being left on the surface as a mulch. The second technique is no-till cultivation; there is no disturbance of the deep levels of soil and fertilisers etc are contained within the upper layers. The third technique is automation; computer and satellite information is used to help control the  operation of seed drills, harvesters, sprayers etc all informed by bang up-to-date data from drones overflying the fields.

On 25 Aril 2021 we were given two tasks; one group clearing scrub around a lake (the pond team) and the other group recovering used plastic sleeves from saplings planted in previous years (the hill team). Two separate work groups ensured we complied with Covid Regs on numbers.

The lake is an extensive man-made lined reservoir as a source for irrigation in summer. The excavated material was tipped around the perimeter so as to form a bank which was planted with trees including specifically willow. Over the years the remainder of the bank has been invaded by bramble, black thorn, nettles etc so that it is no longer possible to walk around the perimeter of the lake. Our job on 25 April was to remedy this, or at least make a start on the remedy.

We are well practiced at scrub bashing and the glorious weather that day made an accustomed task into a pleasure, at least until the afternoon when weary muscles reminded us – “first the pleasure, then the pain”.

In term of wildlife, we watched a Martin scouting the eaves of the grain store at the meeting point. Around the lake there were large numbers of Orange Tip butterflies, with a solitary Moorhen on the water and remains on the bank of some substantial fish, possibly taken by otters ?. We were shown a square of corrugated tin on the grounds, attractive to grass snakes in warm weather and an adjacent “nest” built to encourage the snakes to breed.

One of the farm hands (Gordon) stayed with us for the day (with his dog, Archie) and he talked to us about the lake and the farm, and he showed us the grass snake location.

By the end of the day we had formed a clear access around about 100 yards of the lake and could look back on a clearly visible achievement – very satisfying. This was an excellent introduction to GVCV for a first-time volunteer who turned out – she admitted to having enjoyed the experience and would turn out again – plucky girl. 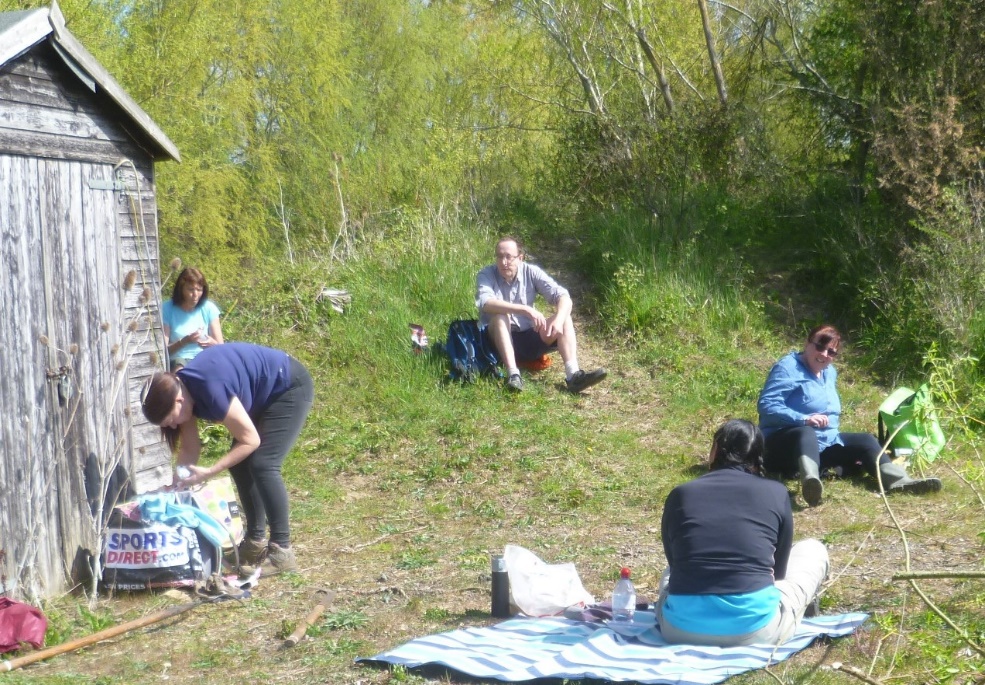 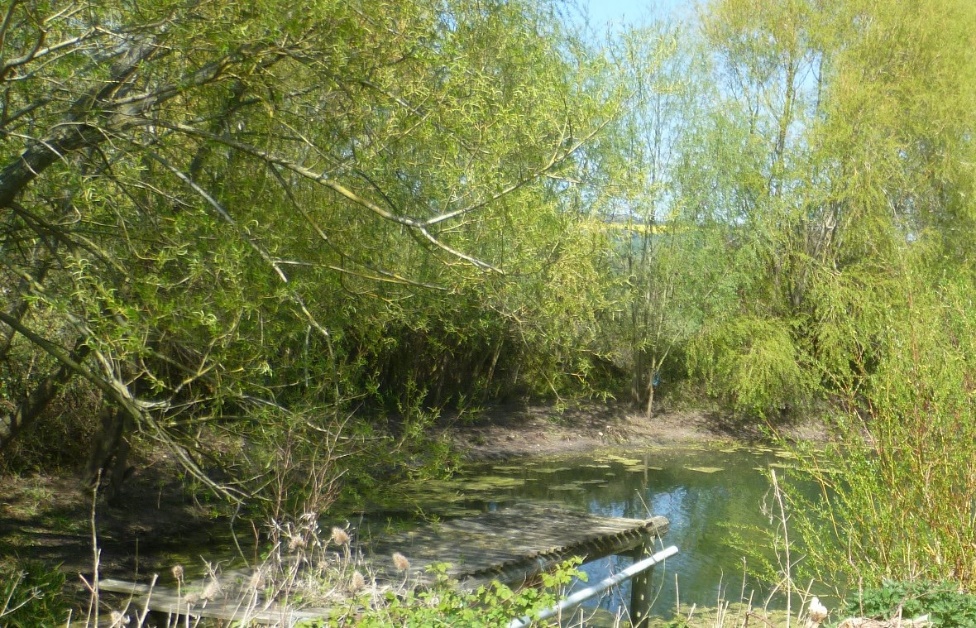 A small group of 4 volunteers worked in a substantial copse planted approx 20 years ago collecting the plastic tree guards that originally protected and supported the growing saplings.

These discarded guards littered the woodland floor and many were still attached to the tree, trapped in the bark which had overgrown the bottom edges. These had to be painstakingly pulled away or cut free. 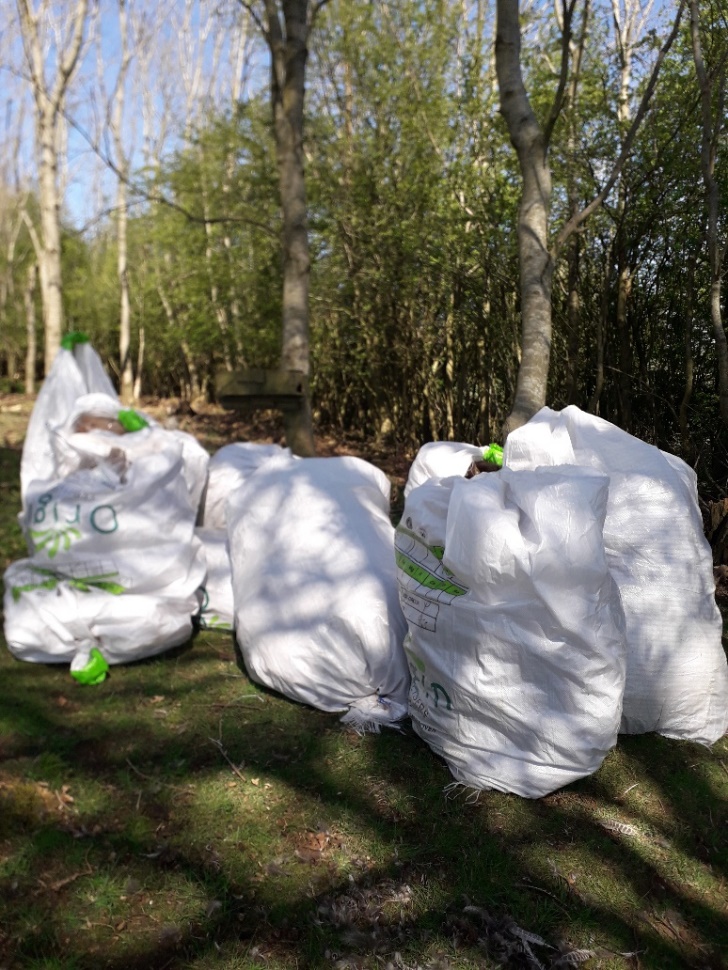 We collected 8 large sacks full. A useful job to get done and one for the farm manager to tick off his “to do, sometime” list. 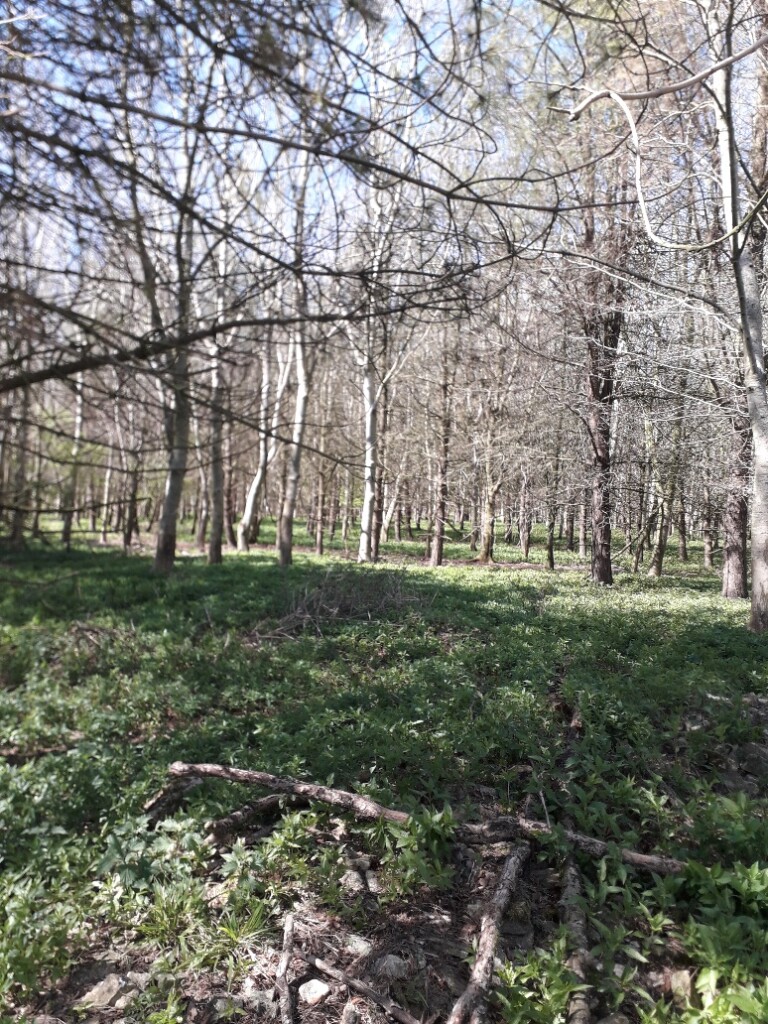 The tree guards obviously served their purpose well because there is now a healthy close planted woodland copse, which may well require thinning out at some future time by GVCV.