On Saturday 21st May 2022, the Gloucester Vale ‘crew’ made the most of smashing Spring weather to visit the Nailsworth festival and Weighbridge Inn for lunch. The day included a very traditional duck race, live music, locally produced stuff and a good excuse to catch up over a pint. GVCV has socials throughout the year giving us an opportunity to catch up between tasks and visit new places. 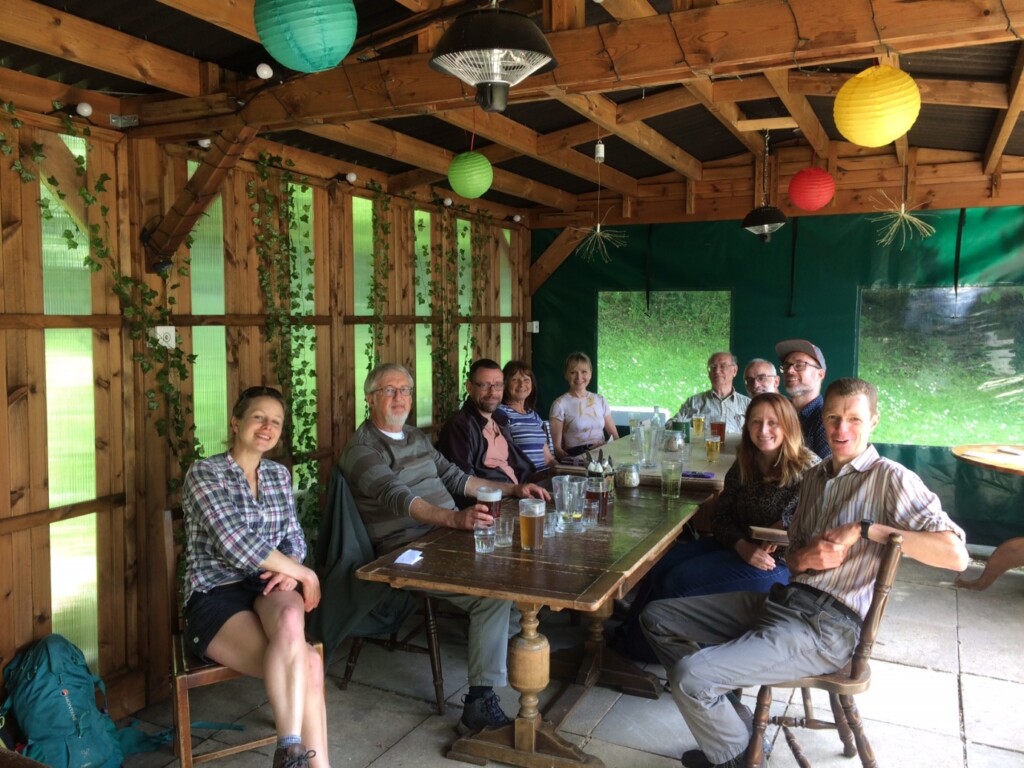 This task was arranged to help maintain Churchdown Park – a popular community space – for use by wildlife and by people.

Our regular group was joined by three enthusiastic helpers from Dowty Propellers (a GE subsidiary) who were keen to get outdoors together, build teamwork and contribute to the local community. The Dowty three planted the side of a tump with shrubs that will provide habitat and nectar for butterflies and bees. 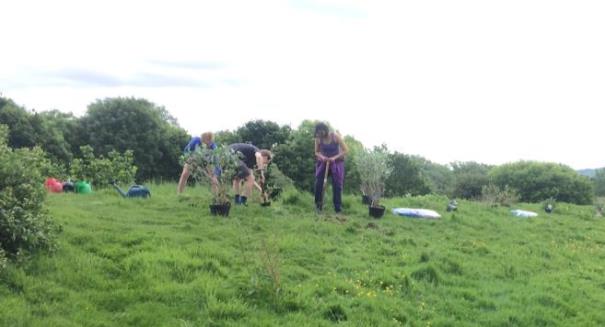 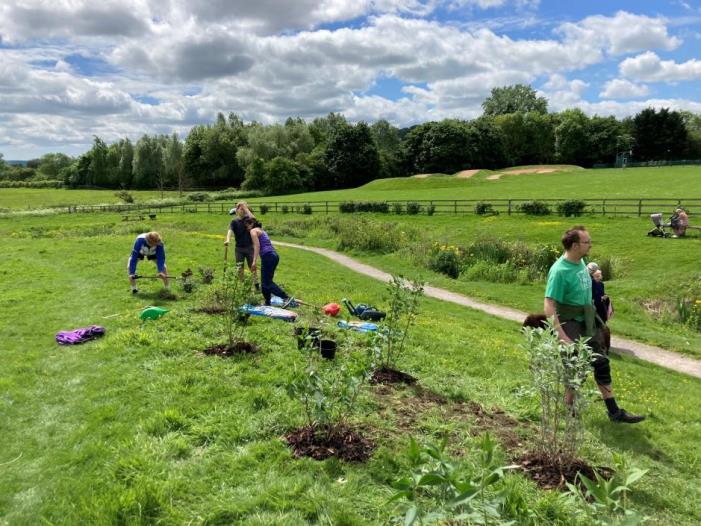 The group also cleared blanket weed from four of five ponds on the site, to prevent de-oxygenation and help pond biodiversity. Excitingly, great crested newts were found during this work (as well as smooth newts, dragonfly larvae and nesting moorhens). Work was curtailed to avoid disturbance to these creatures. Finding and identifying these will help guide appropriate management in future. 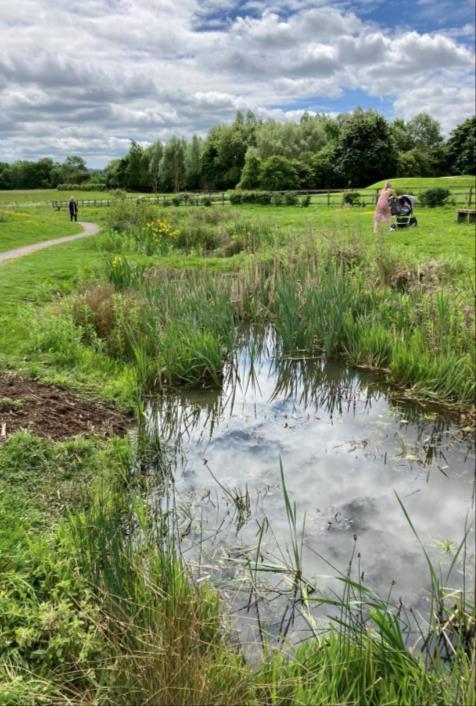 A healthier pond, showing community use

The team also found other work on the site: clearing nettles from a willow ‘tunnel’, modifying tree guards to help a (GVCV) previously-planted hedge to grow and discovering and clearing some invasive Himalayan balsam which we found on of the site.

Part of the team – still smiling 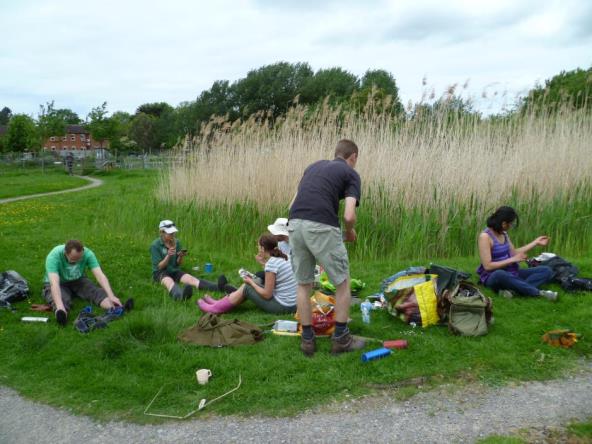 We even took time to enjoy a tea break ☺

The weather thawed for Gloucester Vale’s first ever task at the Hempsted Infill (former landfill) site.

There are plans to convert the site over several years into a new country park for the benefit of the local community and wildlife. We spent the task planting over 300 trees to help establish a new woodland on the site boundary. 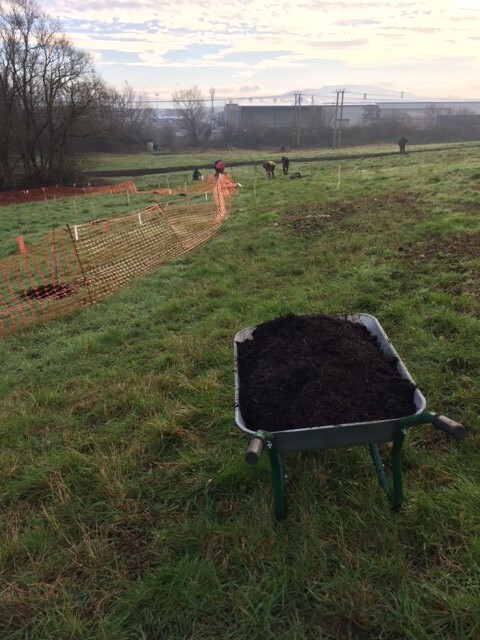 The “Before” picture with mesh to mark the area to be planted this time and a wheelbarrow full of compost to give the saplings a good start. 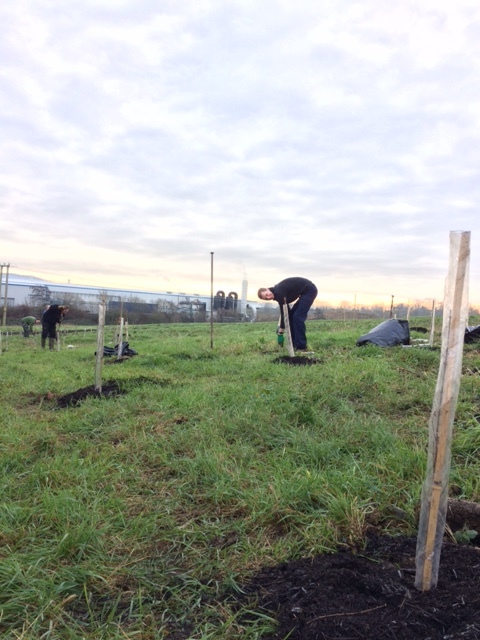 The “loneliness of a long distance tree planter” Sounds like the title of a book to me. Just look at that sky, to die for if you are a landscape painter. 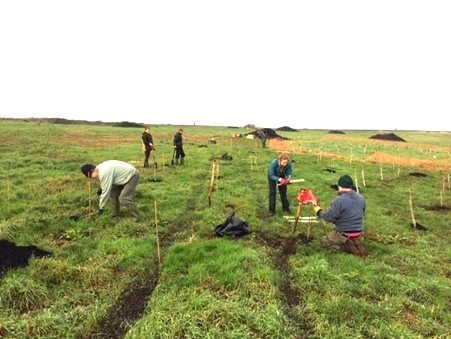 The middle part of the task. All beavering away digging pits, planting whips, composting around the base, fitting protective sleeves around the whip and supporting cane to prevent deer etc from having the saplings for breakfast, leaning backwards on ones spade to ease an aching back.

Tree planting is a great way to stay warm during a winter task and the sunshine made for a great day out. Thank you to Mez from the Wildlife Trust and the local team for hosting. 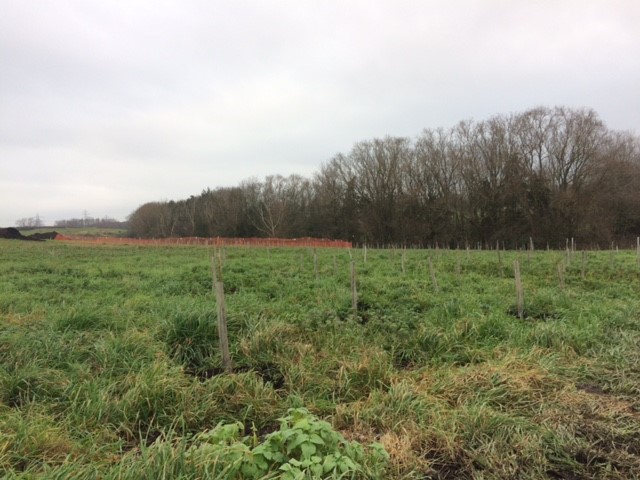 The finished product. Only a few short years and it will be a forest, hopefully.

On Sunday 2nd January 2022, volunteers from GVCV braved the muddy and wet conditions at Hempsted to help continue tree clearance around the lakes. This work helps to create new habitats around the pond edges benefiting ground plant species, small mammals and waterfowl.

The group also built new log piles which are great for nurturing fungi species found onsite such as polypore (photo).

The log piles serve a purpose but there is a vast amount of associated brash created which serves no purpose and this needs to be disposed of. The practical solution to this is to burn the material – not ideal in environmental terms but a necessary to maintain access. We burned a proportion of the brash accumulated from previous tasks but the heavens opened after lunch and dampened our fire as well as our enthusiasm.

This has been an ongoing task as we clear around the perimeter of the pond in bite sized stages but now we can see an end to the work in this section – you can see from the photograph below how pleased our volunteers are to hear that.

Volunteers from Gloucester Vale support a range of conservation activity on the Overbury estate. 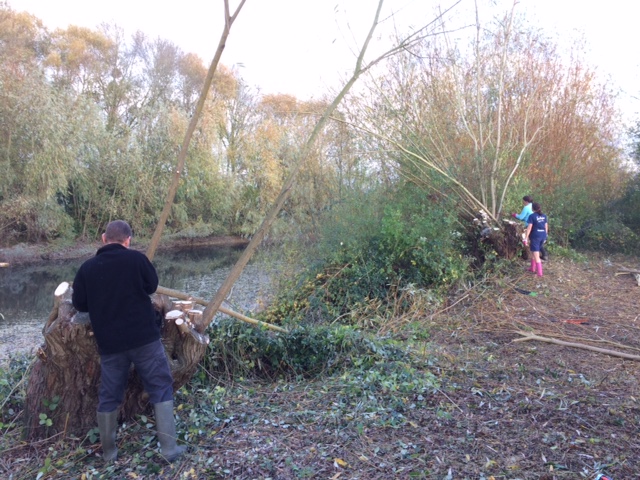 Tackling the willow around the edge of the reservoir 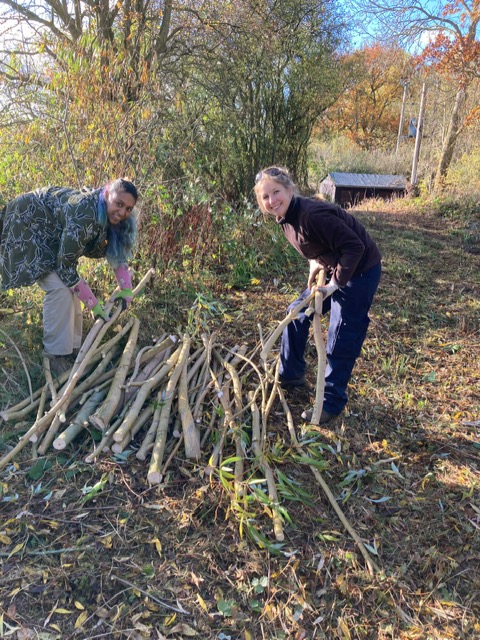 .Stacking the smaller stems for re-use 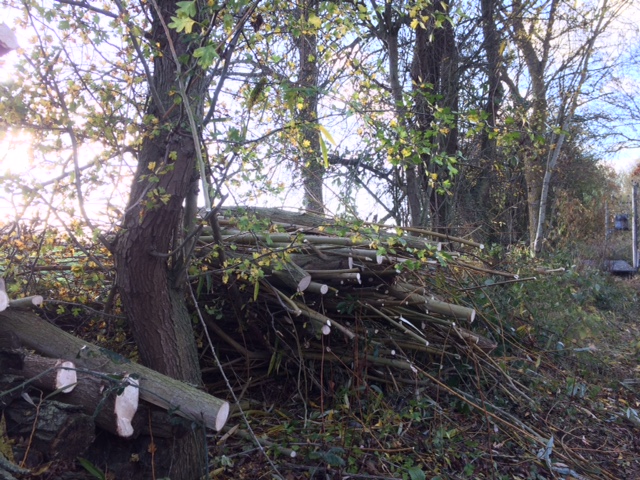 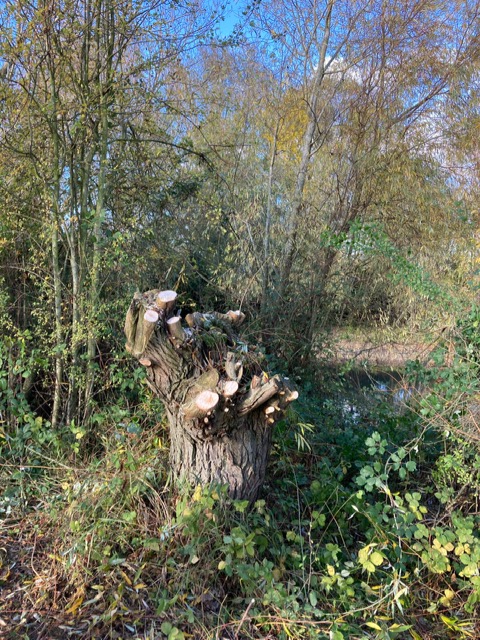 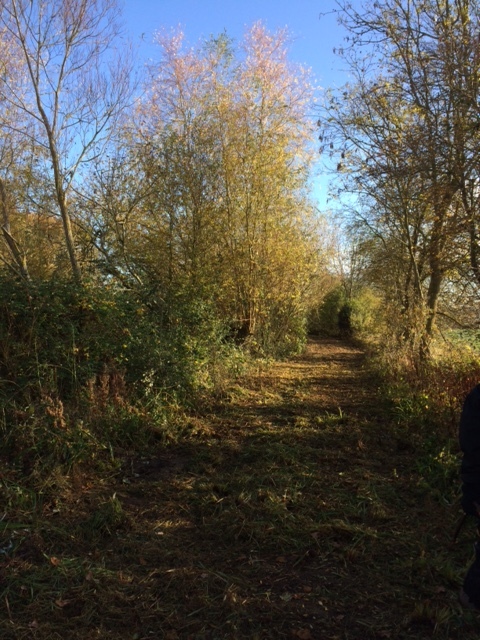 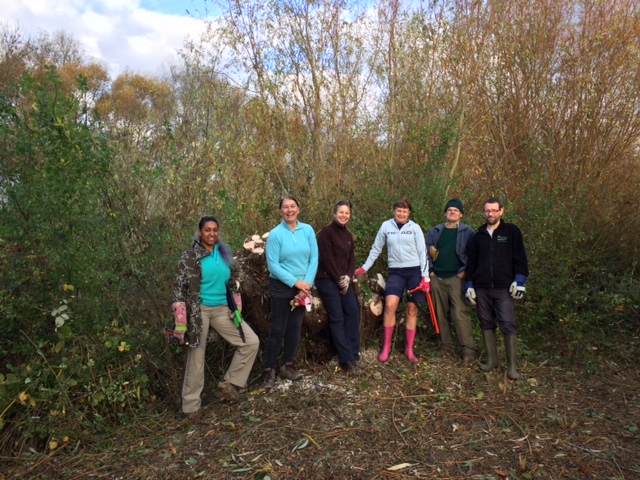 On Friday 1st October 2021 GVCV enjoyed an evening of food, beer and highly competitive skittles at the Cheese Rollers pub in Shurdington. 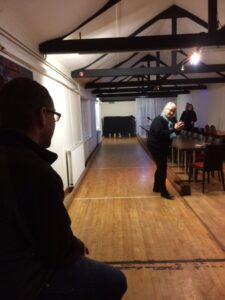 Wooden balls hurled down a wooden alley. Noisy but really satisfying when the pins thump down. 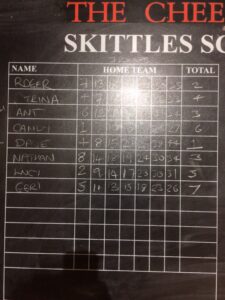 The skittles was a close match, but new group member Geri showed how it was done winning the all important cactus boobie prize. None of us can remember who won – though the photos are a good hint 😊 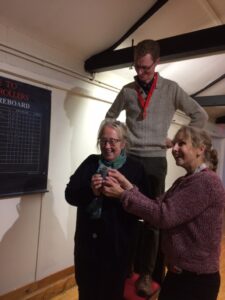 Presentation of prizes. Was to be free holidays in the Bahamas, but Covid prevented that so we up-graded to a home made medal and a prickly baby cactus

The (now annual) Hay Day in Rodborough is held in late summer or early autumn to remove cut grass from a 1/3 acre wildflower meadow (near Rodborough Common) which is owned by Candy and Dave – GVCV members.

This task reduces soil fertility, reducing the growth of species such as rye grass, thistles and nettles and allowing a wide range of meadow plants to thrive – 30 were counted in 2021 including three species of orchid.  These, in turn, attract butterflies, wild bees and other insects and support a food pyramid that allows other species such as swallows to thrive.

Cutting the meadow also makes the site attractive to cattle, let in from neighbouring fields, who then keep the grass under control until the spring and provide cow dung-habitat for fungi and beetles.

The event was postponed this year because the farmer was unable to cut the meadow when hoped, however five volunteers were able to attend at short notice on a second date and rake the vast majority of the hay off the meadow in about three hours.  Four volunteers raked hay into long furrows whilst the fifth rolled them on to a tarpaulin and dragged the hay to a compost heap at the bottom corner.

Lunch was provided by Dave & Candy.  Special thanks go to Pete for bringing special hay rakes from his Bradford-on-Avon conservation group – these made the task significantly quicker.

This task was for Gloucestershire County Council’s Access Team, restoring a 8m steel and wood footbridge over a stream at Bowater (Stroud). The footbridge (point A on the map below) is much used by walkers, especially in the winter when it can become impossible to ford the stream. 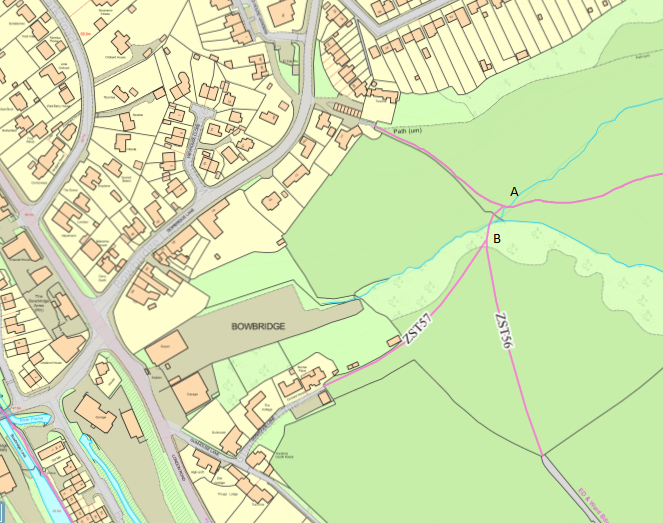 Alan Bentley of the Access Team supported the task with a preparatory visit on Monday 6 Sep, spending about an hour with the group at the start of the session on Sunday 12 Sep and by providing materials.

The group parked along Bowbridge Lane whilst tools and Candy’s truck were bought closer to the work site via a gate at the end of Gunhouse Lane. Eight members attended.

The group successfully achieved the following:

– Removal and replacement of the bridge deck, adding recycled plastic runners underneath the new deck to improve expected life.

– Replacement of half of the bridge rails.

This left the bridge in a usable state and it should remain so for several years.

Problems with materials (rails too short for one section of the bridge, grip strip too long for the deck without appropriate tools and PPE to cut it) prevented full completion, however these tasks are now on a slightly shorter ‘to-do’ list for the Access Team’s contractors to complete. The decision was made half-way through the day not to start any work on a second nearby bridge as it was important not to leave this in an un-usable condition.

This was an unfamiliar task for the group:

– New skills were learnt, with overall efficiency improving from amateur (but keen) to ‘a bit better’ through the day.

– Attention was needed through the day to ensure that all members had work that they were able to progress.

– The variety from more familiar tasks was a positive and getting the bridge to a much improved state gave a sense of achievement. 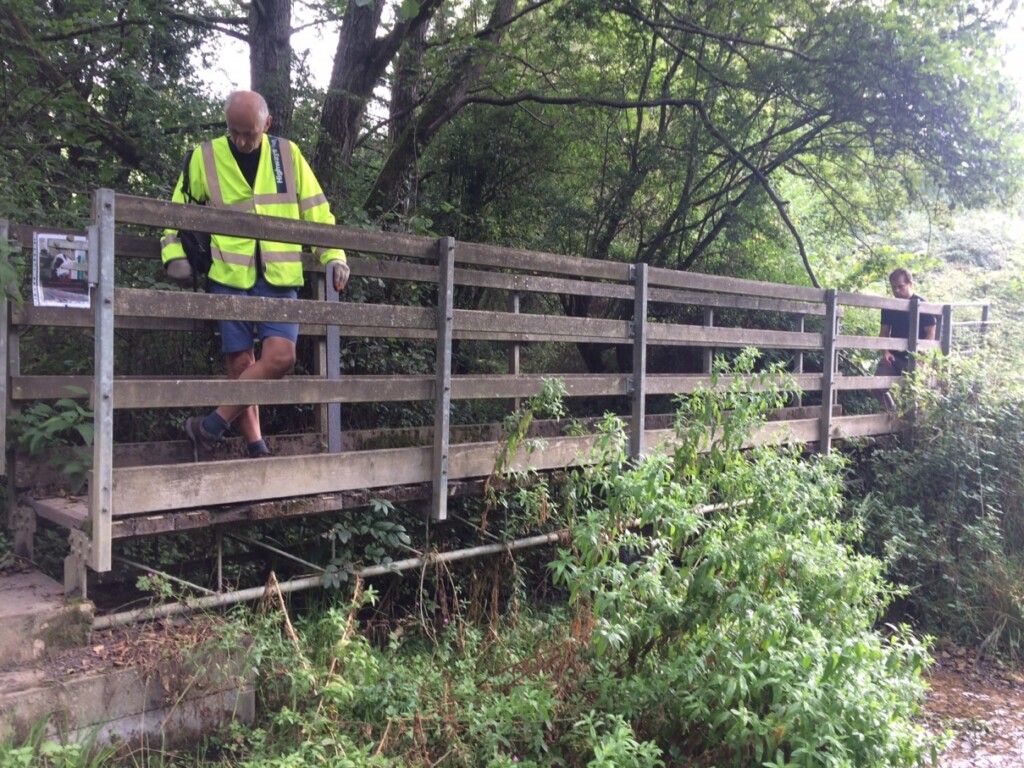 Overgrown paths before and after: 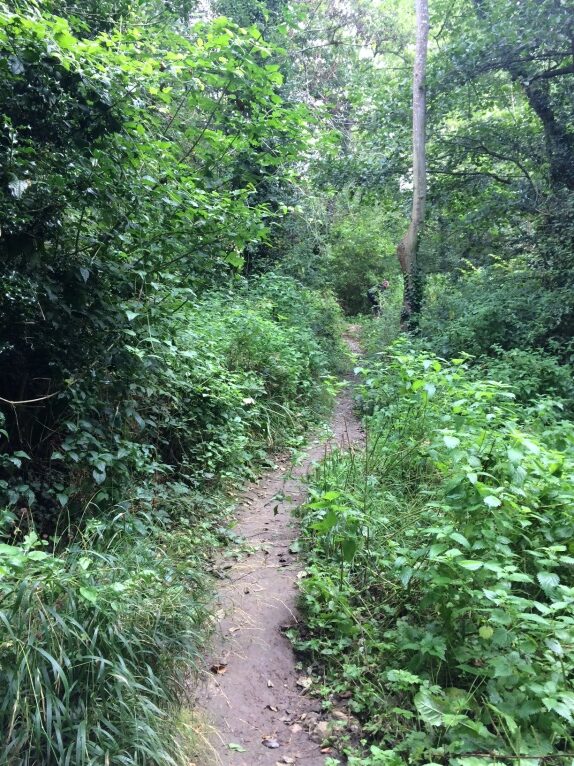 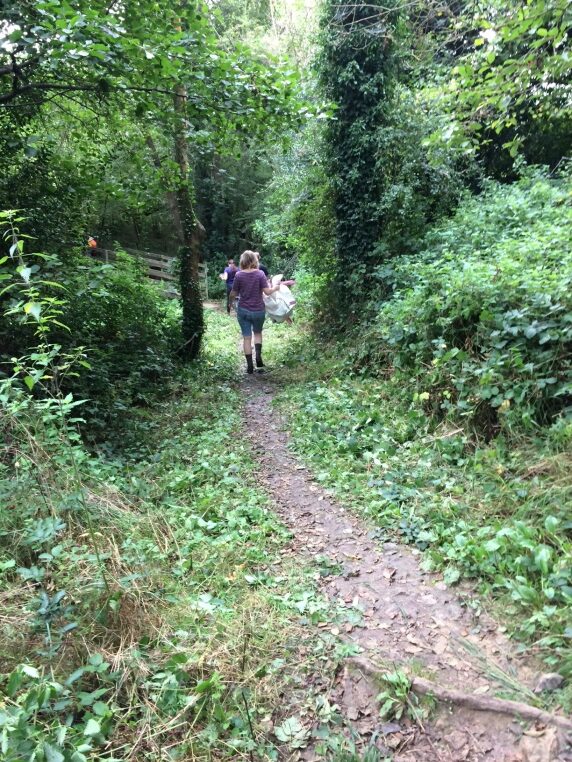 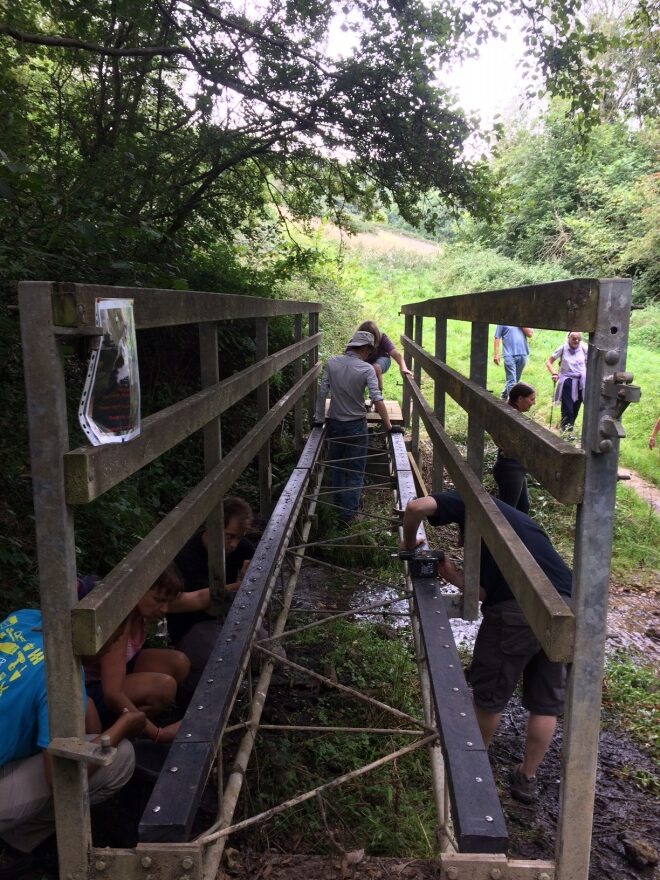 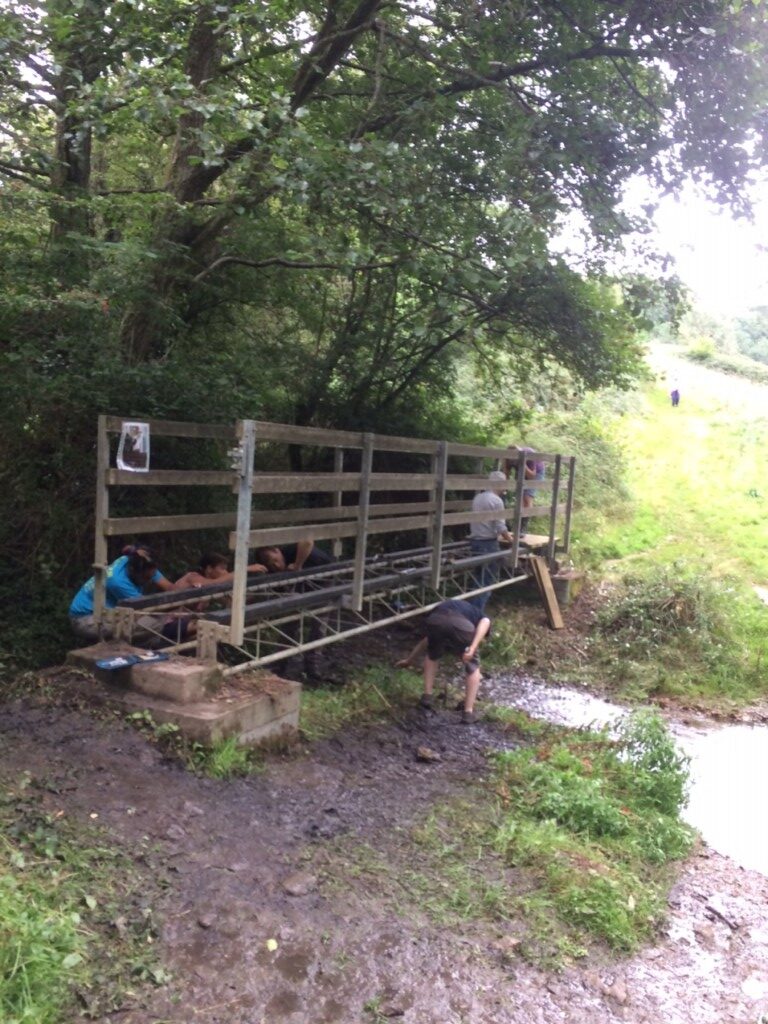 7/8 of the team on the completed bridge: Mel, Mark, Vanessa, Trina, Josephine, Dave and Anthony 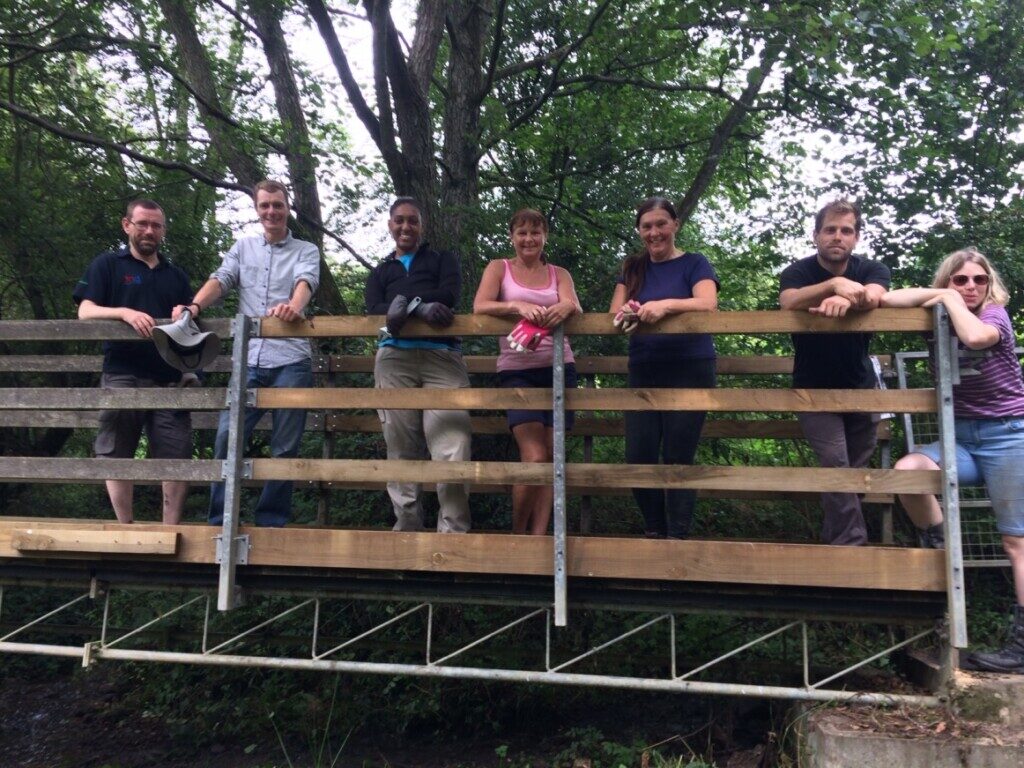 A chance to get together beyond our normal tasks, 13 of us met up at the Docks Gloucester. Started at the Lord High Constable before moving on to Brewer and Chef just a short way along. We did have to wait a bit for the food but it was pretty good stuff when it arrived.